A tale of two losses

Share All sharing options for: A tale of two losses

Well the past two days have sure sucked. When you spend more time looking at law statutes in Minnesota rather than more worthwhile endeavors like pouring over numbers or coming up with a new list of reasons why Patrick Kane is a reprehensible human being, something is askew.

Despite the losing streak it's not all doom and gloom. Ignore the people (not you good looking people here, but the ones I keep having to read on the Twitter) who think this team already needs to be blown up, there's plenty of positives along with the negatives, especially when you stand back and look at the past two games.

Come along, won't you?

> The Wild game was a mess. Too many penalties, the Rypien engagement, the Wild converting nearly every scoring chance and so on. Vancouver was lucky Dank scored in the opening 120 seconds because never got in sync afterwards and Luongo didn't dish out a big save to spark the boys in front of him. Last night was the exact opposite: Luongo was clutch  (save for the shootout) and the skaters were composed and responsible (save for leaving Stalberg open). It was literally like watching two different teams.

> Not sure what Friday will bring, but put me in the camp that believes keeping the twins together is just as important as keeping the second line intact. Spreading the wealth worked well in Carolina, but as long as the struggling continues, it's better to roll your thoroughbreds as they did in Chicago. Sedins/Hansen wasn't effective (is this the first time our a leading hitter skated with them for an entire game?), but they did have Keith and Seabrook to contend with and, at this rate, it's better to have the flexibility of Kesler with Raymond's speed and Sammy's experience to spell the Sedins and INSERT WINGER HERE. Hooking Kesler up with Schaefer and Hansen was pointless, reducing the Canucks to even more of a one line team.

> No matter what line Raymond or Samuelsson are playing, they're shooting. Raymond is currently 7th in the league with 24 SOG, Sammy tied for 5th with 26 SOG, both of which are higher than Hossa, Kovalchuk, Stamkos and others. Kesler's 21 SOG has him tied for 10th; if they can gel as a unit and pick better opportunities, odds are the favorable bounces will follow.

> The Wild game was so out of hand early on that AV couldn't roll his lines. Against Chicago, a more composed, simple effort allowed AV to roll - especially notable in the second with some excellent sustained pressure by the Malhotra and Tambellini lines and some double shifting later in the third for Kesler and the Sedins.

> On defense Edler and the Hoff are proving to be the money guys while the actual money guys (Hammer, Salo and  Ballard) all sit with their respective ouchies. The Swedish/German connection are providing all the defensive offense, SOG and are manning the points on the PP. The injuries have pushed their TOI up dramatically: Edler is 12% higher than he was last year (averaging 25:14) and Hoff is up 8% (averaging 24:34).

> Parent hasn't been bad, but giving him first pairing minutes wasn't working. His TOI change (12:52 down from 16:28 the night before) reflects that. By the second period in Chicago, Parent was paired with Rome on the third pairing and Bieksa was with Edler instead. Then again, considering we gave up SOB for a guy who can at least substitute into the top pairing should be considered a mild win.

> Fun fact: Alberts has the second best shooting percentage on the team at 33% (Dank has 35%). If Alberts doesn't take another shot all year, he'll have boosted his career best by over 500%. Back to realistic terms, he leads the team in hits (21), good enough for fourth in the league though remember to always take hit tallies with a grain of salt.

> For the Bieksa fans: he's top two in QUALCOMP, top three in offensive zone starts and leading the blueline in GFON/60. For the Bieksa haters, he's still horribly vexed with his on-ice decisions, especially jumping into the offensive zone or being out of position when his shot is blocked. He's creating odd man rushes nearly every game, definitely during the past two losses. It's not the end of the world, but it won't silence the villagers at the castle gate either.

> Malhotra's comments about the Rypien thing aside, the guy is immensely valuable, doing everything but scoring which we can't fault him. He's the best PK'er and faceoff guy (68%) we have and last night was the first time I saw him planted in front of the netminder at ES. AV rolled out Manny with Kesler and Raymond in the extra time against the Hawks and they were buzzing.

> On Torres and Schaefer: most of the time I notice Torres he's getting smashed against the boards or failing to get a pass off; I almost never notice Schaefer on the ice and the Schaefer > Morrison decision is looking like a bad gamble with every passing game. At ES both are getting lit up on GFON/60. Then again, they are facing the best of the opposition; Schaefer and Manny are leading the TOI short-handed and Torres edges into the top six on the PP. Schaefer is being quietly responsible (which explains why you'll blink and not see him) and at least not putting the team in a hole. Conversely Torres - who leads the team in PIMs (21) - needs to stay out of the box and get some more pucks on net. I thought he was better in Chicago, but I also wonder how many more games it'll take before he ends up in SOB's old seat in AV's dog house.

> What can you say about Luongo? It's never easy to gauge goaltenders, so I'll just say he looked exceedingly more confident against the Hawks than the Wild (odd, no?). Not just with the Hossa stop, but several other times when the Hawks speed had the Canucks defense on their heels, he was making solid saves and - better still - smarter rebounds, blocking them away from the Hawks in the lanes. What perhaps lead to his turnaround effort? He was pissed...excellent. If that's him pissed, we'd like several more months of him frothing mad.

> Or, if you're in a foul mood and think Vancouver sucks and this season is over before it really begins, then at least show some proper respect and learn to embrace the ascension of our day-walking ginger masters. Huzzah! 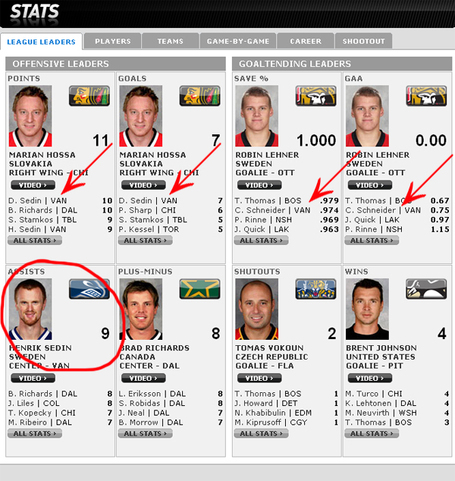