Choose Your Own Adventure: Canucks & Hawks

Share All sharing options for: Choose Your Own Adventure: Canucks & Hawks 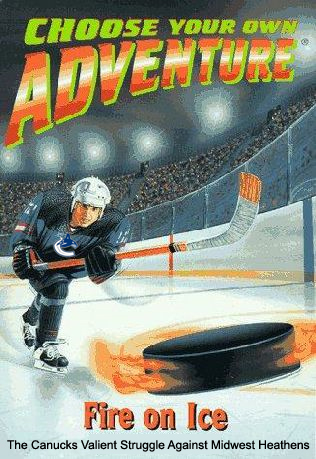 Enemy Pro: Kind enough to give Jassen Cullimore of all people (VAN 94-97) a shot at relevancy. Also deep dish.

Lost in...well whatever the hell that was last night...was the Orcas posted their worst effort this season, which is saying something since they also shat the bed to Anaheim. Six goals on 18 shots? No good. Outchanced in every on-ice situation? Awful. How many times can Mason Raymond randomly fall over? At least four, I counted. More open net chances sailing wide? Damn you Steve Bernier. I'm not even faulting injuries anymore, they just flatly didn't show up. Can't hang it all on the goalie.

In the normal world, Vigneault would put this whole team through a bag skate that would make Don Cherry tap out to a Swedish crochet champion named Kristofer, but instead they skipped on over to - of all places - Chicago. If Hammer is out again, Parent gets the nod who was decent last night despite his -2. Someone tell Bieksa more game five and less game six please. Alberts and Rome: whatever your first inclination is, ignore it and go with the next thought. The Sedins will be busy turning down Keith & Seabrook's advances all night, so if the Kesler (and whatever wingers he gets based on the coin flip) and Malhotra lines want to get on the scoresheet, by all means. Turco's not exactly lighting the world on fire; shoot from everywhere, including the box where they'll no doubt be hanging out all evening. As for Luongo? Enough silk gloves, just shut these pig whores up.

I bet a funny thing about driving a car off a cliff is, while you're in midair, you still hit those brakes! Hey, better try the emergency brake!