Share All sharing options for: Your Morning Coffee- Tuesday October 19 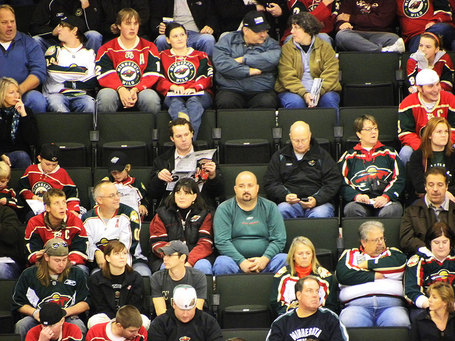 After an excellent pregame report, I wondered what left there was to cover concerning tonight's game against the Minnesota Wild.  I did a little research, fired off some emails and made a few phone calls.  Then I realized I was just putting this off, so I got to it.  They're probably the team we know the least about of our divisional foes, and I still maintain ours is one of those awkward relationships: They and especially their fans and media have a hatred for everything Canucks-related that is so fierce that it borders on the pathological.  We, well... we're trying to remember where we know them from.  So let's get to know... The Minnesota Wild!  More after the jump...

Who are the Minnesota Wild?  Like most teams in the NHL, the Wild have that one superstar who stands out and serves as the face of the team, like Jarome Iginla in Calgary or Vincent LaCavalier in Tampa.  The face of the Wild is Slovakian sniper Marian Gaborik of the New York Rangers.  He of the oft-injured groin (along with numerous other body parts) is probably the most well known Wild player.  He is closely followed by his Rangers teammate, hulking Neanderthal Derek Boogaard.  Boogaard is carrying on a fine tradition of over-rated players going to ply their wares for the Broadway Blueshirts, and I am confident that he will continue his current streak of 226 games without a goal, the longest current streak in the NHL.  It should be noted though, that his 1 assist has him ahead of Chris Drury in team scoring.

Okay enough kidding about former Wild players.  The Wild have seen some hard times of late, having finally broken free from their former cult leader Jacques Lemaire.  They're entering their second season with head coach Todd Richards.  Yeah, we never heard of him either.  And they are hoping to make some strides in their massive rebuilding program, which saw them eliminated from playoff contention sometime during training camp.  There have been some changes to the Wild this year, adding John Madden (who must be thrilled to go from winning a cup to this), Eric Nystrom and the man with the most fabulous hair in the league, Jose Theodore.  Theodore will back up Niklas Backstrom after they lost Josh Harding for the season with a torn ACL/MCL injury.

The Wild are led by their captain, 'Leaping' Mikko Koivu, assistant captains Nick Schultz and Andrew Brunette and another former Hawk, Martin Havlat.  They have just one win so far this season, a 4-2 win over the Oilers, and as mentioned by Sean, got bag skated after their most recent loss to Columbus.  Positives?  Well, they've scored more goals than the Flames and the Sharks.  They play the Canucks twice this week, with a Thursday road game in Edmonton sandwiched in between tonight and the contest on Friday back at Rogers Arena.

All kidding aside, though their progress is slow I like the attempts by Richards and GM Chuck Fletcher to put their respective stamps on a team that was undeniably Lemaire's since it's inception.  They will struggle, and the injuries they're already dealing with aren't helping matters.  Overall though, I think they're moving in the right direction.

What the hell... lunch already?

Both the Leafs and Stars lost last night, bringing their undefeated starts to a close.  So um, ha ha hah!  Hmm.  Try and imagine Tom Hanks saying that part.  Or Gilbert Gotfried.  No new concussions to tell you about, the counter still stands at 13.