Share All sharing options for: A Look Back At The Failure That Was The Canucks Losing 4-3 To The Ducks

The fact that the Canucks lost to the lousy Ducks isn't of much concern to me. It's how they lost. I'll keep this in point form, post some video freeze frames and use the magic MS Paint pen to illustrate this atrocity. 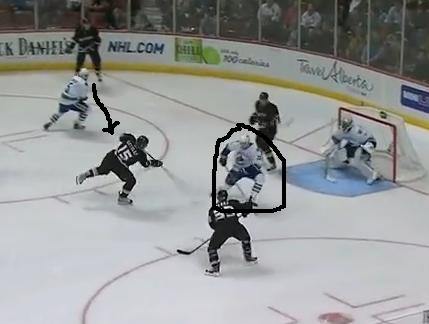 Ryan to Getzlaf to end their pointless drought. Only Alex Edler in front of Luongo here. Getzlaf can pick any corner on Lou that he wants. 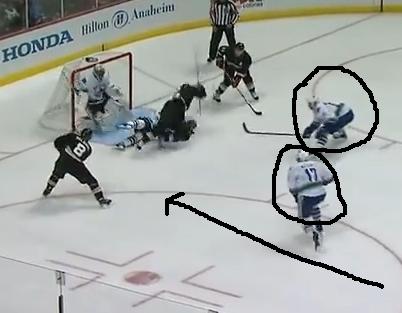 Well look at this...another 3 on 1 in close, with the only defender back getting knocked over. I suppose the Canucks wanted to pressure the points but why? It's not like Niedermayer and Pronger are back there. The pass came to Selanne from the point. Now you've got one of the best goal scorers of all time in a prime scoring spot to pick a corner on Luongo....again. Roberto is pretty deep in his net there... 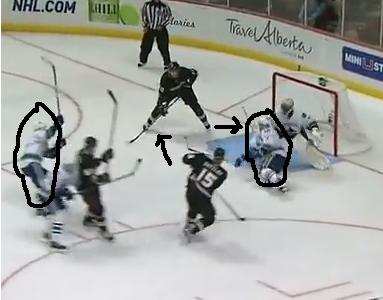 The Canucks were being outplayed in the 3rd but smelled blood at this point, being up 3-2. After Vancouver's missed attempt The Ducks stormed up the ice and Kevin Bieksa (circled on the left) was sprawling to get back to play defence. Hamhuis had his man, Corey Perry right up until the point where Getzlaf received the pass on the right side. Hamhuis plays the shot (fully committed to the point of laying down to block it) and lets Perry go allowing the Ducks captain to slide the puck over to the agitator for an easy goal.  Amazing isn't it. That's 5 on 5, and it's almost another 3 on 1 in close. 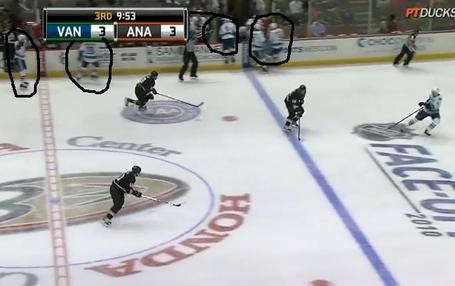 The guy circled on the far left is Henrik Sedin. He's calling for a line change right after he tries to dipsey-doodle around a Duck player rather than dump it into the Ducks' zone. Now you have all these Canucks players (circled) getting off the ice on a change and meanwhile the Ducks are in transition 3 on 1 with only Edler back to try and save the day. Well..... 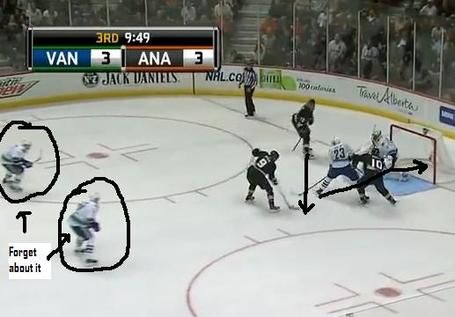 Oh hey look! Another fail. Getzlaf to Ryan and bingo bango there's your winning goal. The Ducks' top line just got onto the ice, by the way. Sloppy and stupid, and it all started with Hank not dumping the puck into the Ducks' zone for the change and obviously a lack of communication all-round.