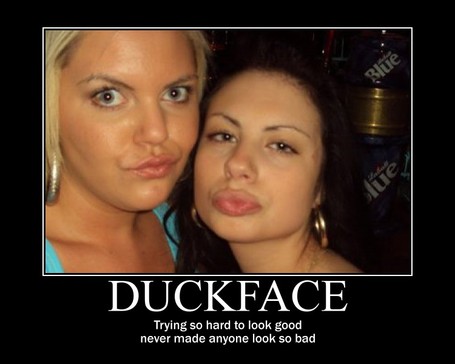 Enemy Blog: Battle of California & Anaheim Calling
Enemy Pros: The spine-tingling Jason Jaffray!, an airport named after the Duke and the Anaheim Bullfrogs
Enemy Cons: Getzlaf's mother hates him, Perry is a jackwagon and who exactly approved this?

Max Reid: My teacher tells me beauty is on the inside.

Concerns in Vancouver: Three goals in two games is the biggie. If that's the extent of our problems, we're in good shape for now. No complaints from the back end where Luongo has been solid and the defense in front of him strong. Up front, the Sedins are fine, but nothing going yet from Kesler or the Malhotra line which is still shuffling guys around as quickly as Burrows stumbles over his lines on radio broadcasts (zing!). If there's one team in this short NHL season to right these offensive wrongs against, it's the Ducks. Why?

Concerns in Anaheim: Let's begin with their 0-3 start. The already defensive-depleted Ducks lost Sutton to a broken thumb yesterday. The already offensive-depleted Ducks are dead last in goals per game. Keeping the puck out of their own net is also a slight concern. They're the most penalized team and, for good measure, their boyband-esque top three guns (Corey, Bobby and Ryan) are a combined -12 with no points, leaving the production to father time Selanne, +35'er Koivu and new guy Fowler.

In years gone by, we've seen the Canucks lower themselves to their opposition. If this "new" version is going to be different, they should take control of this game quick and let the floundering duckies drown in their own ineptitude. Anaheim should come out with purpose in their home opener, so it'll be interesting if Vancouver can stay composed and keep their skate on their throat for 60 minutes.