Share All sharing options for: Your Morning Coffee- Sunday October 10 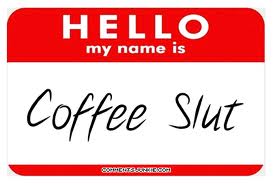 The scene: WAACH 'Cast's home in Victoria, BC.  It's been months since he said goodbye to his friends at Nucks Misconduct, and now he returns to bring the coffee to the masses.

Hmmm.  That's okay, I don't remember you, either.  Anyways... it's good to be back, and while it may take me a little to regain my normal infuriating form, I will be back pissing you all off in no time. I hope you all had a great summer, mine was... interesting.  And highly medicated.  Enough about me though, hockey is back.

So as far as season openers go, that one was pretty much cheese pizza.  Sure, it's better than no pizza but bland and for the most part tasteless.  The speculation about who would be named the next Captain of the Vancouver Canucks was ended with our boy Hank getting the C.  I am cool with this, though my choice was Kes.  Unlike a lot of you though, I say it's done, let's not do multiple autopsies on it, there's a lot of hockey to be played.

While you certainly can't tell what we are going to see from the boys in blue & green this year, just the fact there were a number of changes made by Mike Gillis fills me with hope.  Issues that came back to bite the team on the ass were addressed.  Distractions and disappointments were shown the door.  There's a buzz around this team, and some are suggesting (and not just John Garrett) that this team could win it all.  And lucky for us, we only have to sit through 81 more games to begin to find out if they're right.

Cold pizza with your coffee... we got Chicken, Bacon & Pineapple or Pepperoni, Sausage and Mushroom

So the Leafs have one two games, huh?  Well what do you know, maybe this is the year they break free from the chains that have held them in the basement of the NHL.  Maybe now those long suffering Leafs fans can take off the paper bags and stand up and proudly proclaim "Despite the fact this is almost the same team we had last year, this time we have hope!!".  Meh.  Forget that it's too early to tell anything, wins over Montreal and Ottawa impress me not.  Oh, and can someone please explain to Matt Carkner that yes, this is going to happen every time he tries to fight Colton Orr.  It's getting embarrassing to watch.

With the announcement that Atlanta goalie Ondrej Pavelec is suffering from a concussion, and the Islanders' John Tavares receiving one after getting d-bagged by pond scum Adam Burish of the Dallas Stars, the Concussion Tracker (just one new thing I am bringing you this year haha) is now at 5.  Or 7, if you want to count Marc Savard and Ian Lapierre.  With new headshot rules in place, we should see a reduction in head injuries, right Gary?

So that's it.  Not much I know, but I am easing back into this so bear with me.  To my co-writers here at NM, I missed you guys, and I will be here for the GDT on Monday.  I am trying my best to make sure you get your daily coffee, and look forward to another great season of interaction with the best fans of the game on the best damn hockey blog on the interwebs.