You either surf or you fight: Canucks & Flames

Share All sharing options for: You either surf or you fight: Canucks & Flames 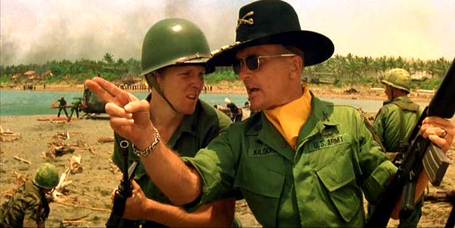 Last season it took until March for Vancouver to finally catch Calgary and leave them in the divisional rear view. Tonight they get a chance to jump start the sequel.

Burrows and the twins have been out of control and Luongo has been earning his paycheck. The defense has shored up a lot of its problems from earlier in the season (and welcome Lukowich tonight and joining him will be Oberg in his first NHL appearance) and AV can point at a 8-1-1 record in the past ten to satisfy the masses.

But shelve all of that for now. Even if the tired Flames have lost two in a row, they'll be showing up pissed. Calgary already leads the season series 2-1 and shouldn't collapse like Phoenix or Columbus. The Flames may be sputtering a bit, but they're not playing God-awful either. And with NW bragging rights on the line between two teams that wouldn't piss on the other if they were on fire...yeah...it'll be good.

Fuck, man, this is better than Disneyland! Here's your gamethread, get involved.