Share All sharing options for: Paradise By the CBC Lights? Canucks-Flames Preview 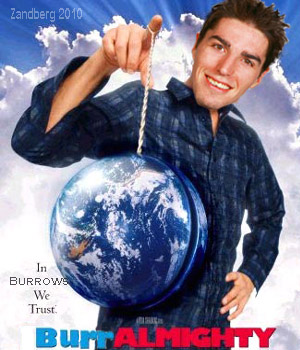 THE ENEMY: Matchsticks and Gasoline

UPDATE (11:52 AM): Jason Botchford has tweeted that the swelling on Sami Salo's eye has not gone down enough for him to play tonight. Evan Oberg will draw into the lineup. Welcome to the NHL, Oberg! Geez, now we have 2 OB's on defence.

It's about time. The Canucks' win-loss record finally places them in a spot that "makes sense": on top of the Northwest Division. To maintain that spot, they are going to have to beat the very team they just dethroned. The Flames lost 3-2 in regulation to the Blue Jackets on Friday night and missed their chance to regain their spot. So this game is going to have a playoff feel to it, hopefully.

A bit of Canucks news: as you already know, Aaron Rome will not play tonight and Brad Lukowich will slot in. Sami Salo should play. Both Salo and Rome where mentioned as having facial lacerations. Did Rome sustain a concussion? Not sure. Either way, hopefully Lukowich delivers. His physical play against a gritty Flames team will be most welcome.

The Flames rested Miikka Kiprusoff against Columbus as they are in a back-to-back scenario. After the Canucks pounded the Flames 5-1 on December 27th, coach Sutter was pissed. "I have a few concerns that are certainly very noticeable and you can't hide it," Sutter said. "It's got absolutely nothing to do with systems, absolutely nothing. It's other things that we have to deal with and we're going to. Whether it's liked or not, it's going to be dealt with."

Calgary won their next 5 games, only to lose their last 2 in a row. Brent Sutter's whip is being put to use I am sure, which is going to make them a pain in the ass to play against tonight. The Flames don't suck. Their road record is an impressive 13-6-3 this season. Quite un-Keenan-like. Brent Sutter preaches an upbeat yet sound defensive system that the Flames buy into on most nights. The same can be said about Alain Vigneault. Another reason why this should be a great game.

So who's rolling for Calgary? Nobody has been all that impressive in their last 5 games, as the team is struggling to score lately:

-Daymond Langkow has 1 goal and 4 assists.

-Curtis Glencross has 3 goals and 1 assist.

-Jarome Iginla has 2 goals and 2 assists.

You may remember this happening on December 27th:

-Any more magic left in Alexandre Burrows? We'll find out. He'll be a Flames target for sure. Burrows and the Sedins are slated to be the guests on After Hours.

-There is no consensus on a nickname for the Sedin-Burrows line. My favorite 2 are: The Poutine and Meatballs Line and The SSM Line (Super Smash Brothers, or, Sedin-Sedin-Burrows).

-Theo Fleury is one odd cat, I gotta say. There comes a time when it's better to say nothing Theo.

-Anyone see this footage on TMZ of Dion Phaneuf singing? His voice is about as bad as his defensive play.