Share All sharing options for: Canucks Can Catch Flames For NW Division Lead With Win Over Coyotes 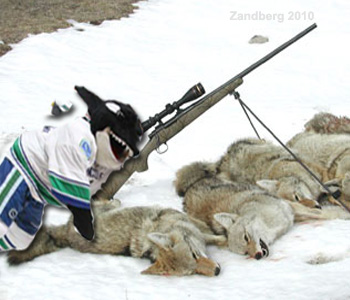 THE DOGS: Five For Howling

The trio [Sedins and Burrows] have played 57 games together going back to last winter. In those 57 games, the line has combined for 73 goals and 119 assists for 192 points. That's 3.37 points a game and is a pace which outdistances the best line in Canucks history. At its peak in 2002-03, the West Coast Express put up 3.31 points a game.

Well, Vancouver can tie Calgary with 55 points if they win, but Calgary will hold the edge having played a game less than the Canucks. Thanks to the Wild and Islanders the Flames and Avalanche lost their respective games on Wednesday night, giving Vancouver a chance to move up in the Western Conference standings. What stands in the way tonight is a Coyotes team that sits higher in the standings and is quietly doing so. They are 6-2-2 in their last 10 and 3-3-3 in their last 9 road games. The Canucks are 7-1-1 in their last 9 home games.

I think it's fair to say that the Canucks will dress the same lineup against Phoenix. If not, we'll keep you posted. Why mess with a winning formula though? The Canucks lost 3-2 to Phoenix in their last meeting on December 29. The Coyotes played tight D and Jason Labarbera got the win in the shootout. Since then:

-Matthew Lombardi has 1 goal and 2 assists

-Some schmuck named Bissonette has 2 assists

-Radim Vrbata has 1 goal and 1 assist

llya Bryzgalov played in all of those 3 games posting a .939, .914 and .905 save percentage. It would be a total hunch for Dave Tippett to play Barbie again against the Canucks again, as the Dogs don't play again until Saturday against the Islanders.

WINNING % WHEN SCORING FIRST: Coyotes 1st, Canucks 10th. There is an eye-popper!

So there you have it. Two teams evenly matched. Looking at the stats, the odds are in the Canucks' favor if they score first, lead after 1 period, and capitalize on their power plays. In the end, stats can be defied. Vancouver has showed a lot of resilience even when trailing lately. It's an important win to obtain. Imagine going 7 points up on 9th place Detroit?! It could happen!