A photo diary of the Canucks vs. Maple Leafs game in Toronto

Share All sharing options for: A photo diary of the Canucks vs. Maple Leafs game in Toronto 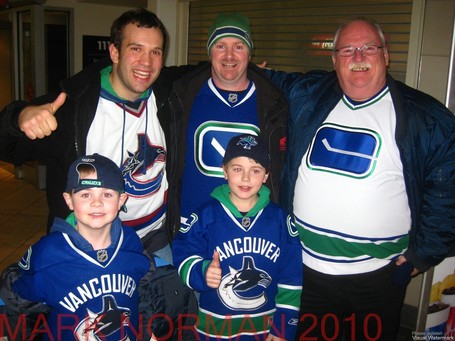 I had the pleasure of attending last night's game at the Air Canada Centre in Toronto. That' me on the left with two random dudes and their kids - some of the thousands of Canucks fans who attended the game.

It was obviously a fantastic game for the Canucks faithful. I had my head in my hands and was enduring the heckling of my buddy after the first period, particularly after that Jamal Mayers goal. Still, with the Poutine and Meatballs line on the ice I am always optimistic about the Canucks' chances-and the Twins and Burrows did not let me down.

I won't go into a recap of the game - Sean and canucklehead666 have already done excellent jobs of that - but after the jump I will provide some pictures from the game and thoughts about the experience of watching it at the ACC. 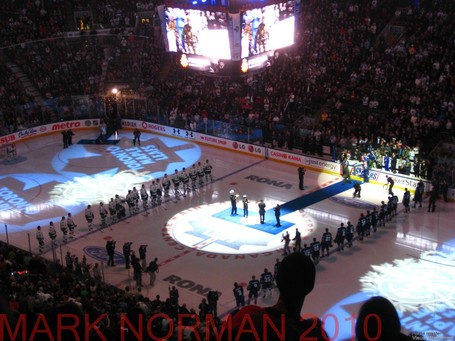 It was Armed Forces Night at the game, meaning that there was an elaborate pregame ceremony which included soldiers rappelling from the rafters and, best of all, WWII veteran Johnny Bower emerging in full camo gear. There were some pretty moving scenes as a result of the military-themed evening. 300 Maple Leafs' season-ticket holders offered up their seats to military personnel. As a result, two older soldiers were sitting in front of us. We had fun talking trash about the Canucks/Leafs, but after the first period they disappeared with an usher. We didn't realize what had happened until a couple sat down in front of us and, after we had chatted a bit, revealed that they had asked the ushers to find some soldiers who would like to upgrade to their lower bowl seats. Pretty classy stuff.

There was also a very moving moment during a break in play. A guy in our section had a sign honouring one of the Canadians who recently died. A few of us in the section started a standing O as a result, and before you knew it the whole ACC was on their feet applauding. Obviously the Canadian mission in Afghanistan is controversial, but I am glad that there seems to be near-universal support in Canada for the troops regardless of people's feelings about the war itself. 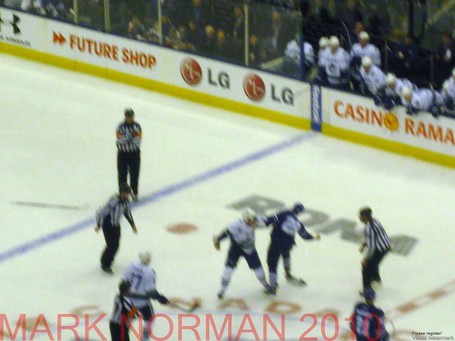 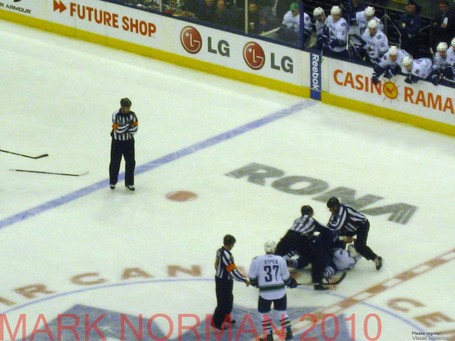 I thought Darcy Hordichuk's fight with Colton Orr early in the first period was pretty clutch given that the score was 2-0 for Phil Kessel after four minutes. Even though they didn't score with the momentum from the fight, I think it helped the Canucks settle down and start playing hockey. Unfortunately it was hard to get a good picture from where I was sitting, so the first picture is pretty blurry. In the second one you get the impression Rick Rypien is salivating and wishing that he'd been in the fight instead of Hordichuk. 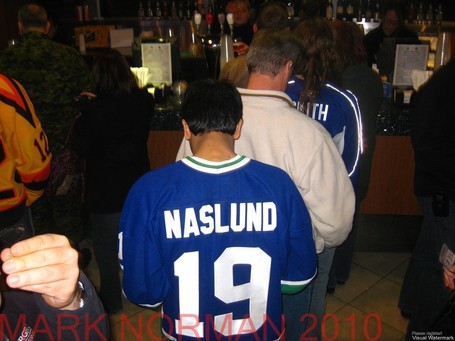 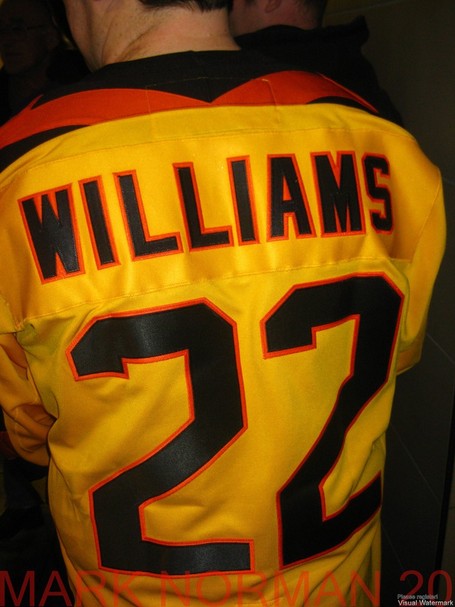 There was a solid array of jerseys at the game, including two former captains and even a Tiger Williams sighting! 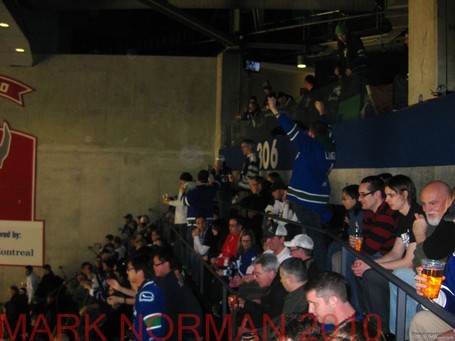 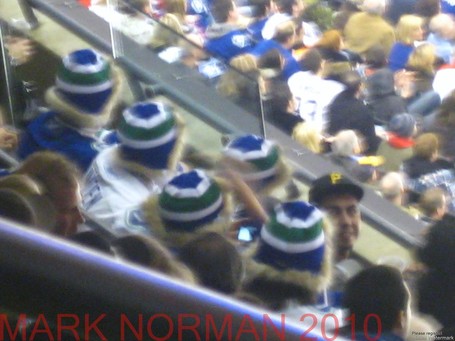 It was tough to get a good picture, but these guys were impressively decked out in the section next to us. There were a lot of Canucks fans scattered throughout the ACC, but unlike other Canucks road games I've seen there were no solid pockets of Canucks fans. I guess in other buildings it's easier to get blocks of seats, whereas at the sold-out ACC you have to take what you can get. I remember against Buffalo a few years back, there were about 200 Canucks fans in two sections behind the benches-it was amazing to see them all there (I was sadly in the last row of the building) rocking out during the game. None of that last night unfortunately.

The atmosphere at the ACC is usually notoriously poor, but last night I found it very good. I think the combination of Armed Forces Night, a healthy Canucks' presence and a quick start for the Leafs combined to create a rockin' atmosphere. 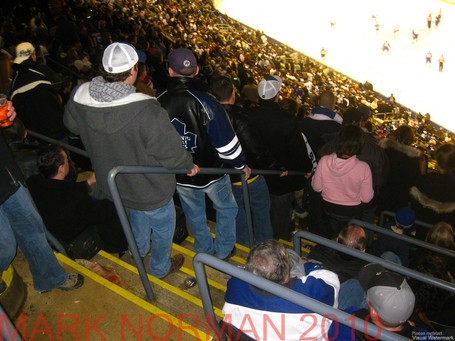 Aaaaaaaaand scene! After Burrows salted it away with his empty-netter, the exodus was on for Leafs' fans. 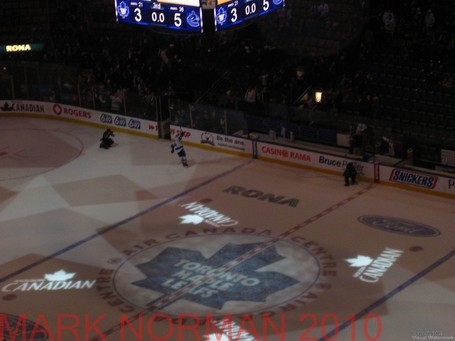 Burrows was the only player (of two Canucks and one Leaf) who came out for the 3 Stars. Why do get the feeling that Alex was revelling in his performance in Toronto last night? 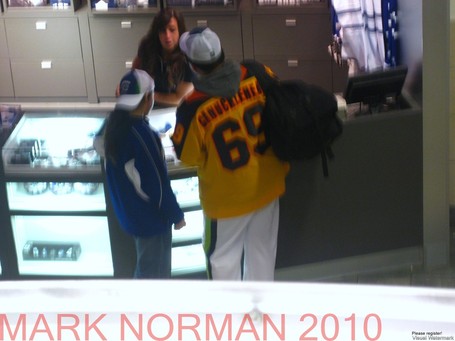 This guy might want to check out the Jersey Fouls rules over on Puck Daddy. Also, he's clearly a hardcore 'Nucks fan - what's he doing at the Leafs merchandise booth? 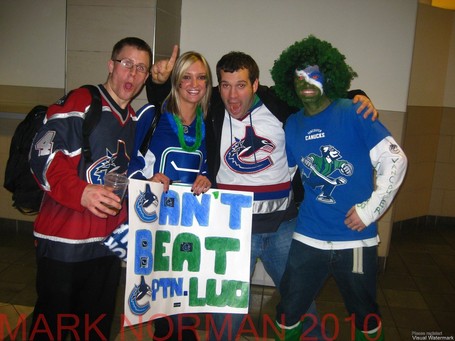 I found out later, while watching highlights, that these awesome folks made it onto Hockey Night in Canada. Well, all of them except that clown second from the right. 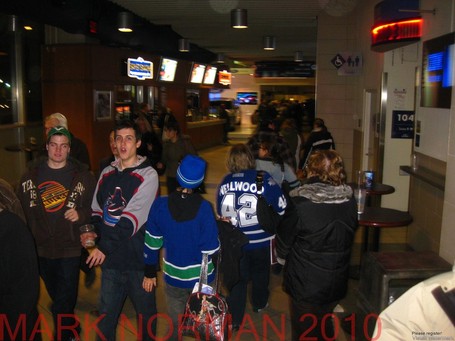 It was amusing to see a number of Wellwood jerseys being worn by Leafs fans. I even saw a Raycroft Leafs' jersey, but unfortunately did not get a picture of it! 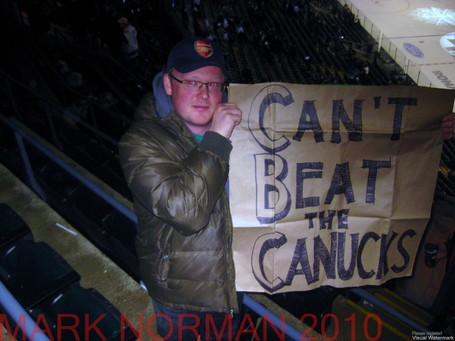 And, to wrap it up, some shots of the many random Canucks fans in and around the ACC last night. I love the pride and passion of Canucks Nation, and it was on full display last night. What a fantastic game and a memorable night. 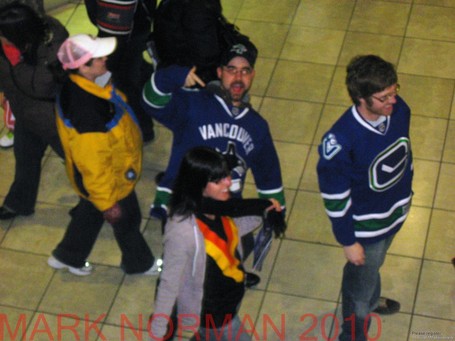 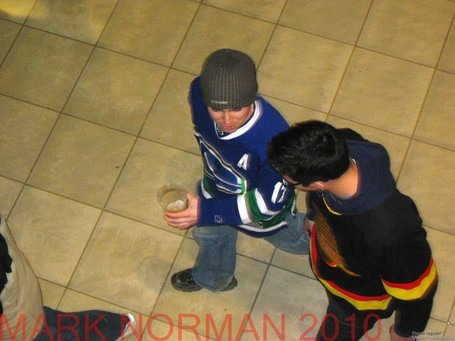 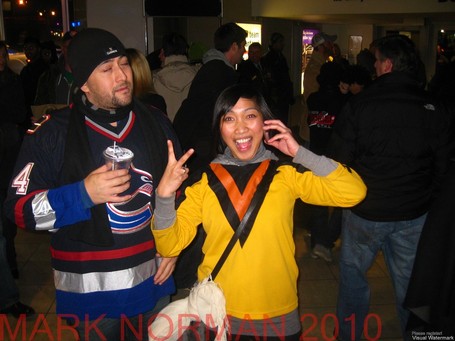