Share All sharing options for: Canucks Erase 3-0 Leafs Lead and Embarrass Them 5-3

A giant tip of the hat to Andrew Raycroft, who had not played in a coon's age and started the 2nd period after Luongo was benched, in a building that had little love for him. Rayzor stopped every shot he faced. He was solid, but so was the team in front of him as the Canucks buckled up defensively after the first period let-down. The Canucks out shot the sagging Leafs 22-13 from the 2nd period-on.

There was a big grin on Raycroft's face as the 3rd period drew to a close. During a lengthy delay before the final faceoff of the game, Raycroft was skating along the glass and saluting Canucks fans in the audience. How's that for a giant middle finger to the Leafs faithful who laughed him out of town a couple years ago? Like someone pointed out in the Game Thread comments, the Leafs are still on the hook for $733,000 of Raycroft's contract after buying him out. OK, so make that TWO giant middle fingers raised in the air! I cheer for underdogs sometimes, and I am very happy for Rayzor right now.

Speaking of middle finger salutes: Alexandre Burrows, or Mr. Everything as he was tabbed by Yankee Canuck a long while ago,

got the offensive ball rolling for Vancouver, scoring shorthanded on a breakaway, on the backhand (again) to narrow the margin to 3-1 Leafs. Look familiar? Check this out:

"How do you spell relief?" 2 goals and 2 assists for Burrows. 2 goals and 1 assist for Daniel Sedin. 1 goal and 1 assist for Henrik Sedin. A combined 9 points, 16 shots and +8 for the killer 3. They looked out of synch and completely covered in the first half of the game or so, but made the Leafs look like pylons as the game went on.

The only reason why Mason Raymond and Ryan Kesler got on the scoreboard tonight was because they assisted on Burrows' empty net goal. They weren't too bad. I thought Mikael Samuelsson was fairly quiet. Line 2 has to be better than that.

No points for Pavol Demitra, Kyle Wellwood and Steve Bernier. 12:49, 13:39 and 8:21 ice time for those 3 respectively. Was Bernier hurt or benched? I'd guess the latter. When does the clock strike midnight for Bernier and Wellwood? No finish at all. Demitra gets a break because we know he's going to get going eventually. Oh yeah, and 3 shots combined for that line. Probably about 10 or more missed opportunities.

7 straight wins for the Canucks. That is only the 3rd time in their history that they have achieved this. They are well on their way to possibly reach the franchise record 10 game winning streak accomplished in November 2002. But they are going to have to play a whole lot better than they did tonight, and that includes Luongo.

The Canucks finish January with a 10-2-1 record. Good Lord. These are good times: 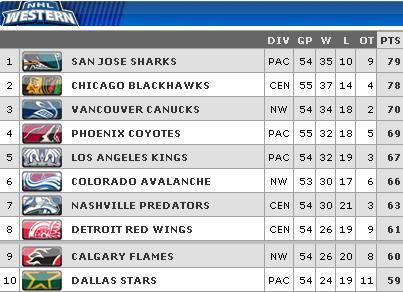 The Canucks are now 11-11-1 on the road this season. That is the first time that they have been at the 500 mark in that category. How things have changed.

-Henrik is 4 points ahead of Alex Ovechkin again.

-Burrows now has 4 shorthanded goals on the season, best in the NHL.

-Daniel Sedin is tied for most game-winning goals in the NHL (7).

-Dank passed several players in the NHL scoring race tonight, including Burrows, Getzlaf, Perry. He now has 51 points and he has played 19 less games than Perry has. Yeesh. Gotta give Dank some love.

-Ryan Kesler is 2nd in the League in takeaways.

I'd give you the highlights here but I don't have to anymore. We have a new NHL.com Canucks Highlights widget in the right sidebar.