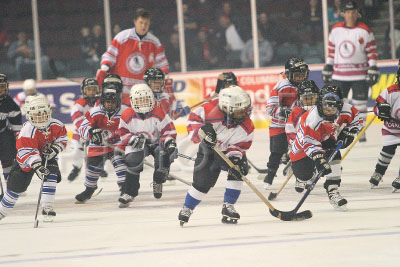 It's fast becoming a day that hockey fans across the nation look forward to almost as much as Trade Deadline day.  Some joke that it should actually be a national holiday, and I think they have a point.  Today we celebrate the game that brings us together as a nation.

I know we're supposed to be angry at Ron MacLean right now, but CBC's HDIC coverage is where MacLean excels.  By getting into small town Canada, and showing the faces of the game, he reminds us all why this game is so important to us.  It's going to be a great day with some great matchups, and with all the twists and turns this season I don't remember this much excitement heading into one.

Obviously we are stoked about taking on the Leafs.  Regardless of how they do in the standings, victories over the Leafs and Habs are something as a Canadian team you hang on your mantle.  It will always be a rivalry, though it's been made so much more interesting by the invasion of Canucks fans into their hallowed halls, just like they've been doing to us since our inception.

A strong start to the first segment of the Road Trip From Hell(tm) is vital, and from the Canucks standpoint you couldn't ask for a better opponent than the Leafs.  From their position in the standings, to team turmoil and goaltending issues, the Leafs might have the appearance of a lamb to the Canucks wolf.  You can bet the coaching staff has prepared the team well, and a big night for the Sedins and Alex Burrows on the national showcase lies ahead.

The Leafs are coming off a 5-4 OT loss to New Jersey last night, a Luke Schenn penalty in extra time aiding the Devils in their victory.  Unlike some teams who might have a chip on their shoulder when they play the following night, this is staus quo for the Leafs, and though I am sure Burke has threatened them all with castration if they lose to the team he hates more than anything in the whole world (save for Kevin Lowe), their play this year suggests he may have forgotten about previously carrying out that threat.

Shocked at Mike Green's vicious elbow to the face of Micheal Frolik.  Not even the hit, which was dirty and suspendable, but by Green's comments after the game, where he felt that he tried to hit with his shoulder and the elbow may have come up (looking for the quote, will post the link once I have found it).  Watch the video and you tell me if you think he should be unsure if his elbow came up:

He is having a disciplinary hearing with Mike Murphy of the NHL this morning, because Colin Campbell's son Gregory plays for the Panthers.  My prediction: a slap on the wrist and black eyes to Frolik and integrity.  Green has what is being called a charley horse from the hit by Kulikov, though he is expected to play Sunday.

The other Hockey Day In Canada games have a lot of meaning too, as the day kicks off with the Ottawa Senators looking to win their 9th straight as they take on the Montreal Canadiens.  Brian Elliot has been incredible for the Sens as they have turned their season around, and getting guys like Daniel Alfredsson and Jason Spezza back in the lineup hasn't hurt either.  The Habs have been up and down (what else is new?) and are currently bogged down in that ridiculous logjam in the middle of the Eastern Conference standings.  Pretty crazy when the 13th place team can win and move into 6th place.  Although I am sure a couple of these teams will die off, with the trade deadline approaching and so many teams in the playoff mix, it creates a very interesting scenario as there appears to be the potential for more buyers than sellers.

The game many will be keeping an eye on is the last match of the night, as the sad sack Edmonton Oilers take on the Calgary Flames in the Saddledome.  These two teams have combined for 21 straight losses, and though some have suggested this could be a 0-0 tie with a shootout that never ends, let's face it: the Oilers don't have the goaltending to hold up their end of the bargain on that one.  While the Oilers streak is a bit alarming, the Flames and all their high priced talent being as bloody awful as they've been this year is both surprising and not at the same time.  Jarome Iginla has disappeared so often this year you'd think they'd have his face on a milk carton, their 'Big 3' Defense have been anywhere from average to brutal, and night after night this team continues to struggle to put the puck in the net.  A most telling stat?  The Flames have scored just 1 more goal than the Oilers this season.  If there were ever a stat that shows you how important goaltending is, it's that one.  Even with Mikka Kiprusoff, unless the Flames change, and change drastically, they will be where they are right now, on the outside looking in at the end of the season.