Share All sharing options for: Friday Morning Coffee- Take a deep breath and this will all be over (in 43 days) 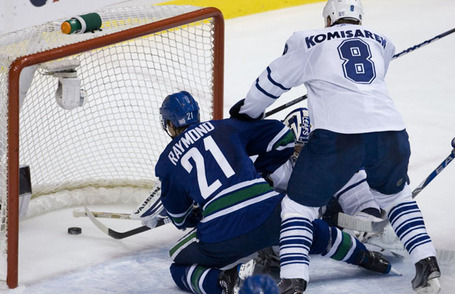 The Road Trip From Hell(tm) has cast a shadow on the first half of the Canucks season as it loomed in the distance.  Now, as they've reached the gateway to this historic road swing, is it really as bad as they make it out to be?  Or is it more of a mental challenge than a physical one?

Tha Canucks are in Toronto and ready to kickstart the trip with their annual "Let's kick the crap outta the Leafs in front of their own fans" game on Hockey Day In Canada.  And while we don't have the kind of dagger in the heart that was Mats Sundin scoring the shootout winner like they had last year, the Leafs team they are playing is significantly worse.  Some of us might not even realize just how bad the Leafs are this year, what with the CBC decision not to subject the entire nation to the trainwreck that is their team.  This year they're so bad, that even some of their diehards are walking away.

From the Canucks standpoint, they couldn't pick a better place to start off with than Toronto.  There's something about the Canucks and Leafs getting together that just really gets the ol' heart pumping.  And there have been some memorable games (last year especially), like the post-lockout game where we had the Bob Cole drinking game on Canucks.com (you took a drink every time Cole mispronounced a Canucks players name, took an un-necessary pause mid-sentence or mid-word, and 2 drinks every time he called the Sedin's Sundin's.  The gold star moments came when he a) waxed poetic about the great game being played by Mats Naslund, and b) two words: Kevin BIESKA).

With Brian Burke and Dave Nonis at the helm of the Leafs, it makes any victory over them that much sweeter.  One of the great things about rivalries is the back and forth between fans.  Chances are you know someone who roots for the other team, and they never miss an opportunity to give it to you leading up to the game.  Being fairly new to this whole Twitter thing, it will be interesting to see how much the Canucks bashing gets ramped up as game time nears.

The meme for the road seems to be that the Canucks and their 1 game under .500 road record spells certain doom for them.  I say their improved road play, plus the makeup of the trip itself, is going to actually work well for them.  The first 8 games are spaced nicely, with 6 games against Eastern squads, and apart from the Senators, squads that are struggling.  Some point to the Carolina game as an alarm bell, but given the Canucks have recently corrected that bad habit of losing to teams beneath them, this is an opportunity for them to put a little distance between them and the Avs.

As an added bonus for the Canucks, the Leafs actually get to deal with Martin Brodeur tonight before facing Roberto Luongo tomorrow.  We would tell you who will be in goal for the Leafs, but does it really matter?

The Oilers and Flames face each other tomorrow in the late game of the tripleheader for HDIC, but they've actually been locked in a ferocious battle all month to out-fail each other.  12 straight losses for the Oilers as they dropped a 2-1 decision to the St. Louis Blues.  Sam Gagner had a chance to tie it in the last minute, but fired the puck into the chest of Blues goalie Chris Mason instead of the wide open top corner.  The Flames meanwhile managed to come back from 2 down against the Phoenix Coyotes, but once again couldn't score in the shootout.  9 straight for the Flames, 12 for the Oilers and they meet Saturday.  Call me crazy, but I have a feeling Pat Quinn walks out of the building with a smile on his face Saturday night.

The Canucks are still in first place in the Northwest thanks to a little help from the Minnesota Wild, who took care of the Colorado Avalanche in a no doubt thrilling 1-0 nail biter.  Even if the Avs win tonight, the Canucks have the tie-breaker, another testament to the hard work the team has done in determining their own destiny this season.  A weird note from last night's match, apparently Darcy Tucker hit an Avs player with a hit that was somewhat dirty.  I am as lost for words as you are, friends.

Lots of other goodness last night, from the 3rd period meltdown that saw Atlanta come back to dump the Flyers, The Senators continuing to roll as they dumped the Penguins 4-1, and the brave lads of Chicago (except for Ladd, who as we know is a coward )somehow managed to put Limogate behind them and hung on to beat the Sharks in OT after blowing a 3-0 lead.  Make of that what you will, but personally I don't think this game solved anything in trying to determine which was the better team.