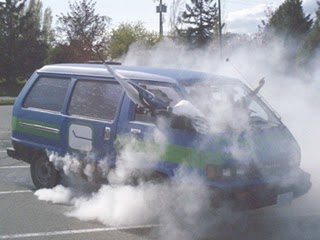 We knew it was coming, and leading into this season the big question for the Canucks was: Can they win enough games at home before they set off on this record setting road trip?  With the most home wins in the NHL, and a record of 17-4-2 since Dec 10th, you have to think the Canucks have done almost everything they could in their circumstances to head into The Road Trip From Hell(tm).

So um, could someone please explain to me how this is not a 3rd man in penalty?  Just bizarre, and a bigger concern than the slash by Paul Kariya on Henrik Sedin last night.  Not a huge one either way, but let's face it, every single call for or against the Canucks will be dissected for the rest of the season.

Much has been made of the Canucks road record this season, currently 1 game below .500.  But a closer look shows them 6-3-1 in their last 10 away from GM Place, and with 6 of the first 8 games on this road swing against Eastern teams, 4 of them currently out of a playoff spot and it's conceivable that the Canucks could go 5-3, perhaps 6-2 or even better on this swing.  Anything above .500 on the first segment is good, especially with the last half of the trip against much tougher opponents.  But the key was for the Canucks to rebound from a slow start and rack up home wins, and sitting in 1st place in the Northwest, you can say they did as well as anyone could expect.

A lot of positives to draw from last night's win over the Blues.  Apart from the obvious in winning over a team well beneath them in the standings, the Canucks showed not only that they have guys who can score clutch goals, but that shutting down the Sedin line doesn't mean you've shut down the Canucks.  Mason Raymond and Ryan Kesler both had huge games last night, especially Raymond who appears to be getting hot again.

Yes it wasn't a picture perfect win, but until hockey games start getting judged like figure skating, I am not going to worry too much about optics and concern myself mainly with the two points.  The big concern about the road trip is obviously the defense, as you hope that Sami Salo will be back in the lineup soon.  Willie Mitchell is not heading out with the team, and with every game he misses with concussion-like symptoms, the angrier I get that there was no punishment handed out for the chicken-shit hit from behind by the Penguins' Evgeni Malkin.

So somewhat healthy, but definitely confident the Canucks leave home, the Leafs in their sights and all controversies now dealt with.  Of course we know the Toronto media will licking their chops to try and manufacture more from these now dead issues to try and draw attention away from the smoking wreckage that is the Leafs, but if I may speak for the organization, to all the media in T.O.: "No comment."

Another great thing about the timing of the trip is the opportunity to show the Eastern media exactly why Henrik Sedin should be the Hart trophy winner this season.  If this line lights up the hapless Leafs on Saturday night, you can expect to hear a lot more about 'Hank for Hart".

Interesting to see people trying to rationalize positives out of Calgary's shootout loss against the Dallas Stars.  Yes, they scored 3 goals, and those goals came from 3 players under intense media scrutiny (Phaneuf, Jokinen and Iginla).  But they blew a 3-1 lead with a goal in the last minute of the second and then the tying goal down two men after Jay Bouwmeester took a selfish boarding penalty when Rene Bourque was already in the box for playing the puck with a broken stick.  Not to mention Kiprusoff taking two slashing penalties in overtime, creating a 5 on 3 that almost cost them the game.  This team is in serious trouble right now, and with the Coyotes awaiting them in Phoenix tonight, it doesn't get any easier.

Fortunately for the Flames, the Red Wings dropped another one last night, losing 5-2 to Minnesota.  The loss allowed the Flames to back into the 8th spot, but it's far from anything to celebrate.  A Flames tonight gives the spot back to the Wings via the game in hand.

The Rangers continue to slide, another loss last night at the hands of the Carolina Hurricanes amidst news that Rangers fans are plotting a 'Fire Glen Sather' rally.  One wonders why it's taken this long?  The man has had years and pre-salary cap, millions upon millions to spend on teams that consistently fail in a manner that most teams, if not all would find simply unacceptable.

The Capitals won their 8th straight last night, against one of the few teams that can't deal with Eastern conference squads, the Anaheim Ducks.  As worrisome as Jarome Iginla's play as of late is, you have to think the Team Canada braintrust is looking at Ryan Getzlaf and Corey Perry and thinking the exact same thing.  And call me a homer all you want, but putting Alex Burrows on the taxi squad isn't exactly a bad idea.  I mean, why would you want the player who scored the most goals of any player in January, right?