Get some beer and some cleaning products: Canucks & Blues

Share All sharing options for: Get some beer and some cleaning products: Canucks & Blues 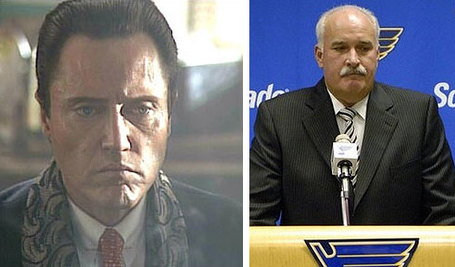 Following our take on the Sabres gamethread, we'll move right along with another QT favorite: True Romance. For those who haven't seen the film, go fix your Netflix queue. This clip should help in the meantime.

With the Blues in town come more reports about this David Backes deal that will never happen. So, with that in mind, hit the jump and let's get started.

Assistant Coach Ryan Walter returns home from practice and is jumped by Crombeen Cam Janssen (scratched?). Walter is roughed up and dragged into his living room. Sitting in Ryan's recliner waiting for him is John Davidson.

Davidson: Do you know who I am, Mr. Walter?
Walter: I give up. Who are you?
Davidson: I'm the Anti-Christ. You get me in a vendetta kind of mood, you will tell the angels in heaven that you had never seen pure evil so singularly personified as you did in the face of the man who killed you. My name is John Davidson. I work as a counsel for the Blues of St. Louis, the organization owning one David Backes who you are trying to yet again steal from us. I hear you are an assistant coach of some sort so I assume you've heard of us before. Am I correct?
Walter: I've heard of Dave Backes, sure.
Davidson: I'm glad. Hopefully that will clear up the how-full-of-shit-I-am question you've been asking yourself. Now, we're gonna have a little Q and A, and, at the risk of sounding redundant, please make your answers genuine. (taking out a pack of Chesterfields) Want a Chesterfield?
Walter: No. But can I talk to you about inspiring your hungry spirit?
Davidson: (as he lights up) Not a chance in hell. You know Backes is as old as Kesler? He's like a son to me. That bitch-whore Gillis brought this on himself. And I implore you not to go down the road with 'em.
Walter: Look, why don't you give me a chance to explain more about my seminars, my books and and even how you can join my Leadership Cruise...
(Before Walter can finish, Davidson slams him hard in the nose with his fist.)
Davidson: Smarts, don't it? Gettin' slammed in the nose fucks you all up. You got that pain shootin' through your brain. Your eyes fill up with water. It ain't any kind of fun. But what I have to offer you. That's as good as it's ever gonna get, and it won't ever get that good again. So in the chance you're in the dark about some of this, let me shed some light. Gillis thinks that just because we're sitting 13th in the West that we're going to pack it all up this year and piss away Kelly's husband for some ginger goalie from the minors.
Walter: Did you know sales is more about leading the relationship than merely using sales techniques?
Davidson: That's of minor importance. But what's of major fuckin' importance is that you tell me where Gillis is.
Walter: Can I be frank? This really isn't the best method to get the top performance out of people, be it me or anyone else. See that's what I do. I can coach top performers. I can deliver incredible value to your organization just by developing your people skills. Coaching is an essential process in all that you do, both coaching for performance, and coaching your next generation of coaches and leaders. So, c'mon, let's get started on this journey of self-realization together.
Davidson gives Crombeen a quick look. Crombeen grabs Walter's hand, turns it palm up, whips out a butterfly knife and slices the palm open. Walter screams. Crombeen hands him the dishtowel to wrap up his hand. Realizing he is going to die and not going on any more cruises, Walter decides to go for broke.
Walter: So you're a Blue, huh?
Davidson: Uh-huh.
Walter: You know I read a lot. Especially things that have to do with history. In fact, I don't know if you know this or not, but the Blues are only in St. Louis because the Wirtz family - you know, your friends in Chicago? - needed to fill up a deteriorated arena they owned. That's the only reason you exist. Otherwise you'd be in Baltimore or god knows where else. You exist because a bloated zillionaire in a rival city needed you for rent money.
Davidson: Come again?
Walter: And how about you? What do you have to show for all of your years as a goalie? Nothing. Not even a Cup. Hell your list of injuries makes Sami Salo sound like granite. How about next time you sniff around Lord Stanley, and if your momma showed you how to read, you go find the 1985-86 Habs team listed and enjoy reading my name etched in eternity. That's right. I've got over 1,000 NHL games under my belt, played as a captain, worked in TV, movies and commercials and have cruise endorsements (sort of). And what is your legacy? This Blues gig and a veiled reference in a fucking Foreigner song. OH BABY. That is a fact. Now tell me, am I lyin'?
Davidson jumps up, whips out an automatic, and shoots Walter. Bloodied and unable to express his feelings, Davidson drops his weapon & turns to Crombeen.
Davidson: David Backes is a Blue! And Double Vision was a great goddamn song. Do you have a problem with it? No? I didn't think so. Go to this comedian's boss's West Van pad and come back with somethin' that tells me where that asshole went.

So many angry white men. And, seriously, why has no one endorsed Walter's cruises?