Share All sharing options for: Tuesday Morning Coffee- The Statement 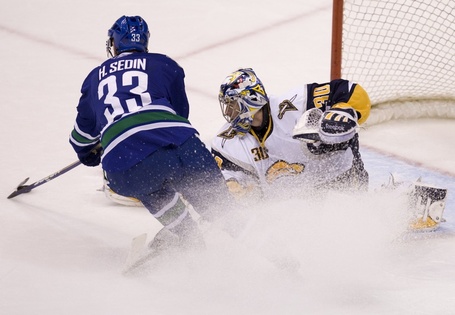 A lot of the hype leading to last night's game between the Canucks and the Buffalo Sabres centered around the two goaltenders, Roberto Luongo and Ryan Miller.  Both will represent their countries at the Olympics in a few weeks, and with similar stats it seemed like a great matchup.  But perhaps the real match was between Miller and Vancouver's Henrik Sedin.  Both are being mentioned as Hart Trophy candidates, Miller getting the early nod from many out East, with Henrik getting the support of journalists on this side of the continent.  More after the jump...

The goal that Henrik scored last night was not just out of character for him, it was out of character for the Sedins as a whole.  The move he put on Miller on that breakaway was much more that of a power forward like a Todd Bertuzzi or Rick Nash style of player than the smooth skating Swede.  I like to call this goal the Statement.  Watch and you will see why.  (h/t to Canucks HD for the videos)

That is Henrik Sedin making a statement against the goalie some have called the leading candidate for the league's MVP this season.  Miller has been phenomenal all season long, there's no denying it.  But in a head to head showdown he got schooled hard by the NHL's leading scorer.  Twitter was aflame with messages from people in disbelief over the goal, but my favorite reaction was from HNIC's Elliotte Friedman 'Geez, what a move Henrik Sedin just put on Ryan Miller. How good do you have to be to make Miller look that bad?"

The Sedins weren't done though.  Now that Henrik (known in the East as the twin that passes) is scoring highlight reel goals, leave it to Daniel to show he can make the beauty set up his brot Brad Lukowich???

When you think about Lukowich's season, playing for Dallas' farm team in the AHL, the victim of cap numbers and finally getting called up because of injuries you can't help but feel good for the guy.  111 games since his last goal, and the look on his face when he scored it will be one of the enduring memories for me of this season.  The Kamloops Blazers fan in me was pretty damn proud.  Overall last night was a pretty decent battle.  The Sabres played a better game than we saw out of the other contenders in the East, and fought hard despite being at the tail end of their road swing.  The NHL may not like it, but as Puck Daddy's Greg Wyshynski said last night, he'd like to see these two teams in the Cup final more than ice cream.

Some notes from last night: both Alexandre Burrows and Buffalo's Tim Connelly extended their point streaks, Roberto Luongo moved ahead of Miller into 3rd on the most wins list with his 28th, and Luongo is now 1 percentage point behind Martin Brodeur.  Think it's still crystal clear who will play in goal for Canada next month? Henrik's goal and assist has him 6 points up on Alexander Ovechkin for the scoring lead (Burrows has moved past Jarome Iginla with 45 points) and Canucks players occupy spot 2 through 5 in the +/- category.

Coffee's brewin' and so is trouble in Cowtown...

I saw a quote last night (damned if I can remember who said it or who it was attributed to) but it went something along the lines that one of the biggest jobs of a General Manager was to lie.  Daryl Sutter is most certainly lying if he is trying to tell us that no changes are going to be made to his hockey club after another loss last night, this time 2-0 to the St. Louis Blues.  7 straight for the Flames now, and Jarome Iginla is now 11 games without a goal.  You know something has to give, as the team has been healthy and only even in games lately thanks to their goaltender.  Whether it's trade(s), firing(s) or both, even the casual observer can see that there are huge problems in Calgary.

The 3 stars of the night on NHL.com were the Blues' Ty Conklin for his shutout of the Flames, Pittsburgh's Chris Conner, the callup from Wilkes-Barre who had two for the Pens in their win over the Rangers and Daniel Sedin for his two assists last night.