How about a little fire, Scarecrow? - Canucks & Sabres

Share All sharing options for: How about a little fire, Scarecrow? - Canucks & Sabres 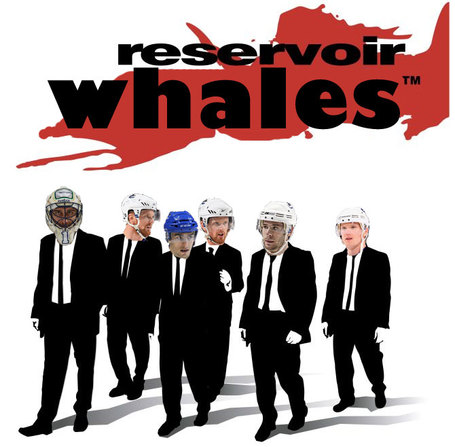 Since it's tough to analyze an opponent you see every two years (and I believe you know where to go for that stuff) let's visit a revised script from tonight's theatrical inspiration:

Ehrhoff: Why can't we pick our own colors?
Luongo: No way, no way. Tried it once down in Florida, doesn't work. You got four guys all fighting over who's gonna be Mr. Black, but they don't know each other, so nobody wants to back down. No way. I pick. You're Mr. Pink. Be thankful you're not Mr. Yellow. Just ask McCabe.
Kesler: But Mr. Brown is a little too close to Mr. Shit. Is there a Mr. Shit?
Luongo: Yes, he's in New York. Or Toronto maybe. I forget. Mr. Shit moves around nightly. You all know him.
(silence)
In Unison: Auger?
Luongo nods.
Ehrhoff: But Mr. Pink sounds like Mr. Pussy. How 'bout if I'm Mr. Purple? That sounds good to me. I'll be Mr. Purple.
Luongo: You're not Mr. Purple. There's an entire team in the Pacific division that's Mr. Purple. You're Mr. PINK.
Daniel & Henrik: Bork bork bork...
Luongo: (sighing, facepalm)...don't start. Don't think I won't go Pink(a) and Pink(b) if I have to.
Burrows: Who cares what your name is anyway?
Ehrhoff: Yeah, that's easy for you to say, you're Mr. Everything. You have a cool-sounding name. Alright look, if it's no big deal to be Mr. Pink, you wanna trade?
Luongo: Hey! NOBODY'S trading with ANYBODY. This ain't a goddamn Islanders firesale, Michael fucking Milbury. Now listen up. There's two ways you can go on this job: my way or the highway. Now what's it gonna be, Mr. Pink?
Ehrhoff: Jesus Christ, Bob, fucking forget about it. It's beneath me. I'm Mr. Pink ok? Remember that when I score on your dumb ass for Germany next month. Let's move on.
Luongo: I'll move on when I feel like it... All you guys got the goddamn message?... I'm so goddamn mad, hollering at you guys I can hardly talk. And knock off the odd man rushes in our zone guys, my groin hurts. Now let's go to work.

You heard the cap't gentlemen, get to work. Gamethread on.