So I shouldn't doubt this Canucks squad as much as I do at times. But many people doubted the Canucks' chances against a power house called the Blackhawks, especially with key defencemen Willie Mitchell and Sami Salo out of the lineup. It was a seemingly tentative start to the game by Vancouver and an interference call on Shane O'Brien only 19 seconds in could have spelled an early doom. But Roberto Luongo was solid in this game from the very start and held them in there until they were tentative no longer, bagging a 3-0 lead after 1 period and rarely looking back.

I am impressed with pretty much the whole team, but I have to give mad props not only to the Burrdins, who the Hawks said pregame that they had to shut down but failed to do so, but also Aaron Rome, Brad Lukowich and Nolan Baumgartner, who played 15:19, 13:28 and 15:18 respectively. I didn't think they looked out of place and that was so key because they were the apparent weakness heading into this game.

Luongo stopped 43 of 44 shots and finally after a few games looked focused, positionally sound and god-like. Of course, it took a game against a team that exposed him in last year's playoffs to do so. Hey, let's just hope he keeps this up.

Auntie Niemi, who shutout the Canucks in their last meeting was pulled after 1. Huet looked good in his stead.

-The Burrdins and Lukowich were all a +3 tonight. (Who coined the name "Burrdins"? Make yourself known!)

-Ben Eager and Cam Barker were -3

-The Hawks had 4 power plays to the Canucks' 1. Didn't matter. The Canucks continue to climb up the League standings in PK efficiency, now sitting in 12th. 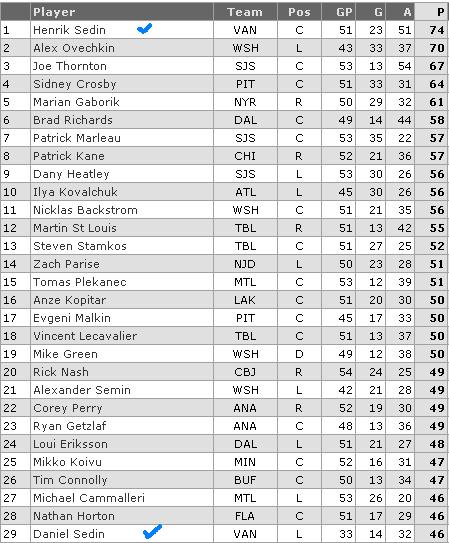 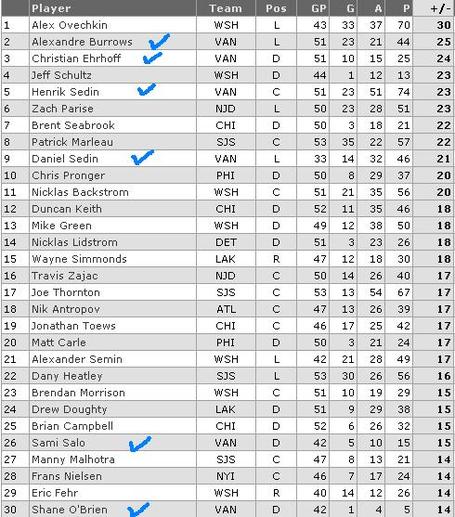 From here I'm almost at a loss for words. These are exciting times. That was a big win.

I like to crucify Patrick Kane any chance I can get, but I have to admit that he was very humble on After Hours last night. He talked about admiring the Sedins' play and how he wants to emulate that. A classy interview with both him and Jonathan Toews. They are just kids for crying out loud, but boy are they learning fast.

Patrick Kane on After Hours Part 1 of 2. (Thanks, missy!)

Patrick Kane on After Hours Part 2 of 2. Anyone find Part 1?

"We really wanted this one bad," said Shane O'Brien,  "We don't like those guys very much."

"He's a coward, he'll always be a coward," Ryan Kesler said of Andrew Ladd. "At least he was man enough to hit me when I was looking this time." Whoa. And when he hit you he wrecked your face a little there, Kes. Ah well, next time.

Since Luongod was the man tonight I will leave you with this save: