Share All sharing options for: Saturday Morning Coffee- Game On! 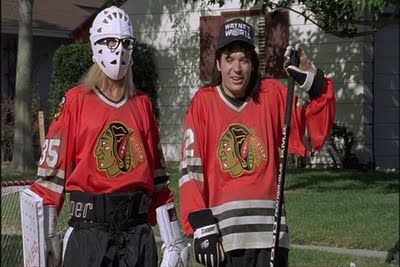 Ok, so three of our four best defensemen are out of the lineup.  You know, our shutdown guys.  It doesn't look good honestly, and most would realize that if we lose to the Hawks tonight, that would likely have a lot to do with it.  One thing is for sure: they're going to need a better effort than the ones they showed against the Oilers and the Stars this week.  More after the jumpage...

It's meeting 3 of 4 against the the Blackhawks (ptooey!) and once again injury issues on the back end are going to be a major factor.  While we have Sami Salo being a possibility for Monday against the Sabres, the loss of Kevin Bieksa's toughness and Willie Mitchell's shutdown abilities means that we will need to see guys like Christian Ehrhoff, Alex Edler and Shane O'Brien give their best efforts of the season.  This Chicago team will eat them alive if you give them the opportunity, so for tonight, I say shut them down.  Trap the hell out of them.  I will take a boring 1-0 win over the Hawks if it gets us through it.  Let's face it, there aren't many other teams in the NHL that have had as many highlight reel goals as the Canucks this season.    We're spoiled.  Just win, baby... that's all that matters.  I am hoping that the recent increase in contact with Roberto Luongo is addressed tonight, but I am not holding my breath.  In the playoff series against the Hawks last spring Dustin Byfuglien spent so much time attatched to Luongo you'd think they would have had to surgically detach him.  Playing smart, defensively sound and disciplined hockey is going to give us a shot at winning.  That and Luongo giving his best effort of the season.  We have your full pregame coverage and gameday threads coming up as always, make sure and check them out.

A little dry toast with coffee

The Canucks could have actually moved into the division lead last night with a Nashville win in regulation, but 9 penalty calls against the Preds, and a late tying goal waved off on a dubious goaltender interference call gave the Avs a 2-1 win.  The good news is, a Canucks win and Phoenix loss in Washington will see the Canucks move into 4th, tied with the Avs but Colorado will have the game in hand tiebreaker.  With every loss you really start to feel for the Oilers, don't you.  A late Sam Gagner goal tied the game at 3, and it looked like they would at least get a point, but a Jason Strudwick giveaway with less than 30 seconds left saw Dallas' James Neal bury it for the 4-3 win.  I think the Oilers have lost just about every way imaginable this year, and Pat Quinn is running out of different ways to describe the suck that is their effort.  It's gonna be a long road back in Edmonton, as it will take years to fix the mess Kevin Lowe has created with that once proud franchise.  One other game last night as the Canadiens defeated Marty Brodeur and the Devils 3-1.  Jaroslav Halak was in goal for the Habs, and could get the start again for them as they take on the Rangers.  The goaltending controversy in Montreal continues to rage... The rumors of a deal between the Canucks and Blues are continuing to spread, though one Blues beat writer says that there is nothing to them.  Other trade rumors circulating right now have Dion Phaneuf going to the Rangers or Thrashers.  I could see the Flames trying to rent Kovalchuk as they grasp at offensive straws to keep from falling right out of contention in the West, but to the Rangers really need another over-hyped and over-paid underachiever?