Share All sharing options for: Thursday Morning Coffee- Well that was UGLY... 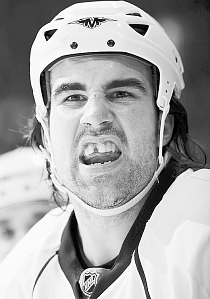 But for those of you about to go into the traditional CDC line of thinking "ZOMG!!!1!!! We sHoulda kikd ther assez!!!", you all need to sit down and take your Ritalin.  If you look back at some of the great teams over the years, you will discover a startling fact: They didn't win all their games 20-0!!  I know, I was shocked too.  I will give you a moment to wrap your head around that and meet you on the other side of the jump.

Yes the win was Zack Stortini ugly, but until they start handing out style points for wins, I will take those 2 points thank you very much.  Do you think teams like Detroit over the last few years, or the Islanders and Oilers of the 80's won all their games handily?  Hell no.  Sometimes they found themselves trailing to teams beneath them, but were still able to get the job done.  Good teams find a way to win.  Did the Canucks stink up the joint last night?  No, but they certainly didn't bring their A game.  The Oilers were motivated, capitalized on an early break and for 40 minutes did a hell of a job getting into the shot lanes and neutralizing 5 on 5 chances.  What do good teams do in those circumstances?  They kill them on the power play.  3 for 4, and all of them things of beauty, as Daniel Sedin moved to within one of tying Brendan Morrison's franchise record for regular season OT goals.  He had 2 helpers as well, to match Henriks 3 assists as he moved 5 points ahead of Alex Ovechkin in the scoring race.  Oh, and Alex Burrows scored too.  He now leads the Canucks in goals with 22, and has more goals than Jarome Iginla, Corey Perry, Patrick Kane and Niklas Backstrom.  Just sayin'.  I do feel bad for former Kamloops Blazers standout Devan Dubnyk, who is still searching for his first win in the NHL.  The Oilers?  Not so much.  Everything goes in circles.  Nearly every team has had times like this.  They'll get through it, get some high draft picks and be back someday.  They were spoiled in the 80's, let's hope they start to realize that and appreciate it, instead of responding to criticism with the tired "5 cups" response.  Yeah, we get it.  Time to move on. Like I had mentioned earlier it was not the Canucks A game, but we did see a number of decent efforts last night.  I thought both Steve Bernier and Aaron Rome played well in their returns.  Brad Lukowich made a number of smart plays and continues to improve each game.  Sami Salo was solid, and his game-tying goal was one of his best, as he fired a quick shot top corner from the slot before Dubnyk could get squared to the shooter.  Mason Raymond buzzed the net all night, and had a beauty hit late in the game as the Canucks were pressing.  He also drew the penalty in OT that led to Daniel's game winner, his 6th of the season.  The officiating last night was dreadful for both teams, with missed and botched calls, and let's face it, that call in OT was a little soft.  Not phantom, but soft.  Considering our luck in that department lately, the best thing to do is not say a word.  Daniel and Henrik were NHL.com's 2nd and 3rd stars of the night, beat out by some goalie, something Brodeur?  Not sure which one it was though...

No rest for the wicked

The Canucks are back at it tonight against the Stars, who have really struggled on the road lately.  The Canucks lead the season series against the Stars 2-1, the last one a 3-1 in Dallas on January 2nd.  Goaltending is a bit of an issue right now for the Stars as Alex Auld has been given 2 straight starts over Marty Turco, whose performances lately just aren't what people expect from a goalie of his caliber.  The Stars currently sit in 10th place in the Western Conference, 4 points behind the 8th place LA Kings.  The problem for the Stars is also the reason why they're still in the playoff hunt.  They lead the league in OT/SO points with 11, and if this team can't start converting these games into that 2nd point, they are going to be left out of the post-season dance.  We have lots of pre-game coverage coming up today so make sure you check back for that.

After tonight's tilt with the Stars, a day off before 3 huge games.  Saturday the Canucks take on the Chicago Blackhawks at GM Place, as they will be looking to show the last match, where a late goal from Mikeal Samuelsson helped them steal 2 points in the United Center was no fluke.  After that it's the hottest team in the East as the Buffalo Sabres, our expansion cousins roll into town for a rare visit.  They looked good against Phoenix the other night, chasing Ilya Bryzgalov in a 7-2 win, but then went into Anaheim and lost 5-4 to the Ducks.  That was their first regulation loss to a Western conference club this season, as they buck the trend.  It will be a goaltenders battle for sure, let's just hope that it lives up to it's billing, unlike recent games against Washington and Pittsburgh.  Wednesday marks the last game of the home stand before the Road Trip From Hell (tm).  The St. Louis Blues are in town for 4th and final meeting against the Canucks, and you can be certain this one will be wild, as these two teams have developed a serious dislike for each other.