Responsibility, what responsibility? You're closing the f'ing store to play hockey - Canucks & Oilers

Share All sharing options for: Responsibility, what responsibility? You're closing the f'ing store to play hockey - Canucks & Oilers 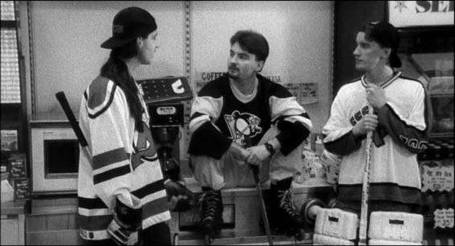 The good guys stroll into Rexall Place tonight to face the cellar dwelling Oilers. Sweet Dionne, the Oil have lost eight straight and 15 of their last 16? They have an absurd amount of injuries, their last game was a 6-0 laughter, Quinn administered an "up-tempo" practice as a result and they'll ice Devan Dubnyk (0-4) in net tonight. Sounds good right? Surely Vancouver wouldn't implode against one of the worst teams in the league. Didn't they beat the NHL-worst Hurricanes when they played earlier this season? They didn't? Crap.

AV isn't waiting for the puck to drop to mix up his lines anymore; he's blowing them up before the guys have their morning coffee. Your new third line: Glass - Demitra - Samuelsson. It's been a few years since Demo was the pivot, but he has centered guys like Gaborik and Tkachuk so if he can find some quick chemistry with Sammy, I dare say we have three scoring lines. Besides it's about time we saddle a guy named Glass with Demitra anyway as reminder against aggressive forechecking.

Don't crucify Bernier's promotion either...at least let him miss an open net or two before we shovel shit on him.

Another friendly welcome for Mr. Rome who returns to take Mitchell's place. No worries Aaron, MySpace is at least 1,700 miles away. You're safe.

If you're in the arena tonight, do say hi to Bettman for us. For all hockey fans actually. One. Big. Giant. Thanks.

We hate people, but we love gatherings. Isn't it ironic? Gamethread on.