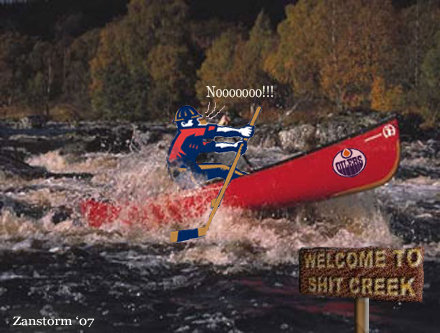 THE ENEMY: The Copper And Blue

UPDATE (1:33): Devan Dubnyk will play in goal for the Coilers tonight. He has an 0-4 record in his young NHL career.

UPDATE: (1:14 PM): So Steve Bernier draws back into the lineup tonight and will play on the Kesler-Raymond line. Samuelsson drops to line 3 with Demitra and Glass, with Wellwood scratched. So that would make line 4 consist of Rypien-Hansen-Hordichuk as Ryan Johnson is not ready to play yet. AV mentioned that he wants more balance in his lines. On Wellwood, he said he likes Woody's ability on faceoffs, but not his general play 5 on 5.

Why the hell does Bernier get that kind of a promotion? He has gone 8 straight games without a point and has 3 goals and 2 assists in his last 20 games. I'm sure they are trying to get Stevie going...but then by god he had better show me something tonight that doesn't involve missing passes or the net in general. Line 2 was working fine the way it was. Bah!

The last time the Edmonton Oilers won a hockey game was December 30, a 3-1 win over the Leafs. They have only won once since December 12, a whopping 15 losses in their last 16 games. After a 6-0 defeat to the Avalanche in Colorado on Monday and deemed the worst loss of the season, the Oilers returned home and were treated to one of the biggest bag skates in recent Oilers memory. Assistant Coach Tom Renney started sounding like his old self when he coached the hapless Canucks from 1996-98. He called the bag skate a "cleaning of the pipes."

More after the jump..

Renney said: "You're getting rid of it all with hard work and gutting it out and sweating and getting mad and all that kind of stuff, just purge yourself of whatever happened last night in Colorado and get on with the next team which is the Vancouver Canucks and that's what we're going to focus on." Yeah dude, that is so deep. Here, let me have a pull.

The Oilers will most likely be without Steve Staios, who whacked his head on the ice the other night, according to Pat Quinn.

The Canucks will not have Willie Mitchell in the lineup due to an ailing back. Mitchell stayed home and did not make the trip to Edmonton. The last time Mitchell missed a significant amount of time due to an injury was back in January 2008 with a .....back injury. Not saying he's a chronic (yet), because these are the only 2 times he's had a back injury in his NHL career that I am aware of. The recent ailment comes from hits by Derek Boogaard and Evgeni Malkin.

Check out the Oilers' injury list here. If that doesn't attribute a little to their woes then what does.

I guess that means that Aaron Rome will suit up in Mitchell's stead, that is, if he can now tell what day of the week it is after getting pummeled by Taylor Pyatt back on January 7. He participated in practice on Tuesday. Rome has averaged about 13:00 of ice time per game for the Canucks this season. Who knows how much ice time Alain Vigneault will give him now. Mitchell is averaging over 23:00 per game this season, so some of these D-men are going to see increased roles, and don't forget, the Canucks play Thursday night as well against Dallas. Losing Willie sucks. Period.

No word yet on the status' of Ryan Johnson and Steve Bernier. Those 2 plus Mitchell are day-to-day. We'll keep you updated. Or maybe you'll keep us updated! Hey whatever works. We are a community here after all. Up front though, it is roster spot battle time, and Mikael Samuelsson said it best (once again): "That's what it's about," Samuelsson said. "Guys are going to feel a little pressure and it's great, I think. You get pissed off if you're not in the lineup and that's how it should be." Well said, Sammy.

We will need to see a better game from Brad Lukowich. He looked to be struggling out there in his own zone against the Penguins, especially earlier in the game. Luko finished a -1 in a 6-2 win. Huh. Dammit Luko get your sh*t together! You're supposed to be my hero!

Personally, I don't care that Edmonton has lost so many games. It doesn't give me a cocky feeling about our chances against them tonight. I want to see the Canucks put these guys away like they did to Pittsburgh. There are no excuses. Vancouver is a much better team than Edmonton and need to play that way. As you can tell, I still don't trust them to be able to put away a lowly team. I still need more convincing. A quick 2 goal lead against a fragile Oilers team is in order.

Iain MacIntyre reports that Roberto Luongo will start against the Oilers and the Stars.  Some suggest he'll play every game right up until the Olympic Break, given the importance of all these games in such a tight race in the West. I'm not sure if that is the case. That will depend on how Luongo and crew do up to that point.

Losses by the Predators, Coyotes, Kings, Flames and Red Wings in their last games give the Canucks a chance to stay very close to the 3rd, 4th and 5th seeds and put more of a gap between themselves and 9th place Detroit, who trail the Canucks by 2 points. (Again. Damned broken record). It's almost enough to make your hair turn grey at times. Colorado currently leads the Northwest Division by 4 points. Bugger.

Despite that, the Oilers are 2 points away from toppling Carolina as the worst team in the NHL. As canucklehead 666 pointed out on Monday (via James Mirtle), the Oilers would have to achieve about a 29-6-0 record to make the playoffs from this point. Yeah, they are already looking at draft picks in Oiler Nation. C'mon Tambellini, you wanna tank it for the rest of the season, admit it. Tell your guys to suck! We need points!

Jeff Deslauriers was left in goal for all 6 Avalanche goals on Monday. Maybe Devan Dubnyk gets the start against the Canucks? His stats are here.

Time to improve on that 9-11-1 road record, as the road trip from hell looms. Vancouver is 3-1-1 in their last 5 games away from GM Place.

Ready to move on from the Burrows saga? I am. Alain Vigneault is, but not without some parting words. Ironically, Darren Dreger tweeted last night that Gary Bettman will be in Edmonton all day today and then in Calgary all day Thursday.

5 ON 5: Canucks 4th, Oilers 27th. The Canucks are as good as the Sharks in this category.

WINNING % WHEN LEADING AFTER 1: Canucks 4th, Oilers 19th. Check out the Preds and Coyotes in that stat category. Wow. The Devils have not lost a game this year when leading after 1 period. Amazing.