Canucks Hang On To Beat Stars 3-1

Share All sharing options for: Canucks Hang On To Beat Stars 3-1

A typical Stars-Canucks affair: defensive hockey but still several good scoring chances, close score, physical style and great goaltending. The day started off with the good (I call it great) news that Brad Lukowich cleared re-entry waivers and will report to the team tomorrow. Then the Canucks put out a pretty decent effort in their final road game against the hungry Stars, with a lot of help from Roberto Luongo to not only beat them, but also to take 7 of 8 points on their road trip and put 4 points between themselves and 9th-place Dallas. There was a reason why that felt like a playoff game. Then this:

Thanks Missy for reminding me: Can't be forgetting about this:

There is something about players' performance in relation to Olympic nods or shafting. Ever since Mikael Samuelsson was excluded from the Swedish team he has been a beast. He has 2 goals, 3 points a +2 and 11 shots in his last 3 games. Ryan Kesler looked more possessed tonight than usual after learning he made the U.S. team. He was the best forward out there by far tonight. 1 goal and 1 assist and over 21:00 of ice time against the Stars. Unreal.

I didn't think the Sedins looked all that good until the 3rd period. Late in the 2nd Daniel was the scapegoat of sorts because late in his shift he did not get the puck deep for a line change. The Stars pressed hard as that tired line stayed out there and Christian Ehrhoff took a controversial delay-of-game penalty soon thereafter. That penalty carried over into the 3rd period, with the Stars all over the Canucks. About 10 seconds after it ended, Louie Eriksson tied the game.

I was hating on the Twins at that point, but almost exactly 2:00 later, the Sedin line pressed in the offensive zone and Dank banked a shot in off Trevor Daley's skate for the winning goal. Even Alain Vigneault mentioned post game basically that Daniel was "lucky" he scored that goal to make ammends for his 2nd period blunder or he would have been in trouble with his coach. AV was smirking.

So was Roberto Luongo, who was fascinating tonight. 1 goal allowed on 32 shots faced. Many of his saves were of the "wow" variety, but none was better than this one: 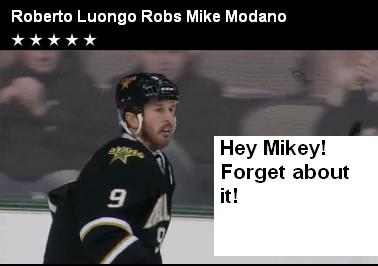 Way to set the tone early in the game, Hordichuk! Check out his monster hit on Toby Peterson and then tilt against Krys Barch. "Cock The Hammer" playing in the background. Nice!

Folks, we have ourselves a confident and consistent team!

3. Loui Eriksson. This guy is the real deal, and should dazzle Stars fans for years to come.