Sunday Morning Coffee: It's not going away, and neither are the Canucks

Share All sharing options for: Sunday Morning Coffee: It's not going away, and neither are the Canucks 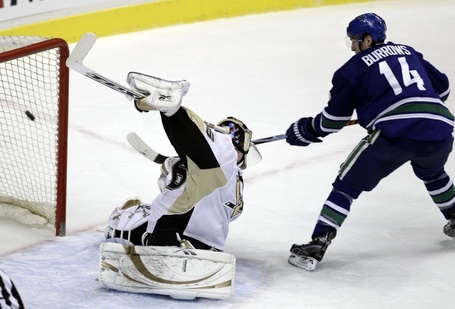 When you think about it, it's a shame really.  After a tumultuous 7 days, all the Vancouver Canucks wanted to do was focus on a big game against the defending Stanley Cup Champions and put all of the nonsense behind them.  That's why the attack piece by Ron McLean on Hockey Tonight came like the blindside hit by Evgeni Malkin on Willie Mitchell last night.  It's absolutely shameful to see someone of McLean's stature engage in a venomous character assasination in a piece that comes off as part attack "journalism" and part NHL propaganda.  More after the jump...

As the week drew to a close the Canucks camp was pretty unanimous in their goal to get the focus back to the game on the ice.  That's why the frustration of what HNIC did is so upsetting.  Burrows has already been punished by the league, and chastised by nearly every sports commentator outside of British Columbia, even some within.  He became the focus of the story instead of the real issue: the problems with the integrity of NHL officials.  It's not a surprise McLean took Auger and the NHL's side.  As a referee himself, obviously he would do the easy thing and stick up for one of his own.  But the mean-spirited, one-sided attack, along with the opportunity to let Colin Campbell speak again on a dead issue (in the words of the NHL) is so terribly unfair it's sickening.  One would certainly think they were watching Fox News and not the CBC.  Not once in the piece did McLean mention any of the issues of Auger's competence or integrity.  Not once was it brought up the alarmingly small number of playoff games he has worked despite being a veteran official.  Or the fact that he hasn't been asked to work the post season 4 consecutive years.  Most alarmingly, the focus on the story was past transgressions of Alex Burrows, painting him in a light that even such noted dirty players like Sean Avery and Chris Pronger haven't seen.  You'd think Burrows was making plans to drag babies onto the ice and eat them.  Such a horrible, disgusting man he is for challenging a man of competence and honour!  Auger is beyond reproach, we have been told.  A couple things really stuck out through all this: One was raised by Coach Alain Vigneault on the After Hours segment with Scott Oake and Glen Healy, in that the piece shows Burrows and Auger talking for 4 seconds, when the conversation lasted a full 31 seconds.  The other is that what may actually shed light on all this dates back to the previous season.  Auger was the official who gave Burrows a 5 minute cross checking penalty and a game misconduct in a game against the Montreal Canadiens.  Watch the video of the hit on Patrice Brisebois and you see two things: Burrows hits him in the chest, not the neck or face like the title of the video, and Brisebois actually tries to cross check Burrows first.

Penalty worthy?  Absolutely.  5 and game?  Absolutely not.  And for this penalty to be assessed to Burrows in front of friends and family in Montreal, must have been extremely disheartening for Burrows.  Now I am not suggesting so much that Burr deliberately tried to pay him back in Nashville with hit by Smithson and his embellishment.  But it could have been in the back of his mind.  Alex Burrows' reputation was known last season as well, and in light of the recent incidents, it comes across looking like an attempt by an official to get a shot in on a guy the officials don't like, and hurt him by taking him out of a game that would actually personally affect him.  Fortunately, the Canucks responded the best way they could.  They lit up the Pittsburgh Penguins, Burrows scoring a highlight reel goal short handed, and then Coach Alain Vigneault went on after the game and very eloquently and passionately defended his player.  Ron McLean owes Alex Burrows an apology, but more than that, he owes the hockey fans of this nation an apology for a bitter, personal attack on a player whose only mistake was letting his emotions get the better of him.  I will be drafting a letter to go to CBC Sports programming department to voice my distaste with this, and I hope you will too.

I guess the other thing that's such a shame about all this is that is continues to overshadow just how well the line of the Sedins and Burrows continue to play.  Henrik had a 3 point night, and looked absolutely dominant against Crosby head to head.  Crosby is having a hell of a season, and deserving to be mentioned in as a potential Hart trophy candidate, but he was held shotless, pointless and finished the game a -3.  That my friends, is how an MVP handles things.  So that got me thinking about some of the Hart candidates, and how Henrik has done head to head against them.  Let's throw a few names out there: Joe Thornton, Marian Gaborik, Alexander Ovechkin, Sidney Crosby, Brad Richards and Anze Kopitar.  All of these players have been mentioned at one point or another as potentially being the one who brings home the Hart.  In the games played against these players so far, they amassed 2 goals and 4 assists, the goals and 2 assists belonging to Richards.  In those games Henrik has 3 goals and 11 assists.  Is it the most fair comparison?  Perhaps not, but it's interesting to note that Ovechkin, Crosby and Gaborik all went pointless, while Henrik went pointless just once in these matches.  The true sign of an MVP is that in the big games, he shows up, and is consistent night in and night out.  Henrik Sedin simply has been better than the rest.  He doesn't pad his stats with multiple games against teams like Carolina (yes I know we lost to them, but that was an off night, they wouldn't do that again) the Leafs and Tampa Bay.  He does it in the Western Conference against some of the best goalies in the league.  I was one of the first to say it, and I won't stop.  Hank for Hart.  It will be the rallying cry.

I was kind of disappointed there wasn't a towel to be seen on the broadcast last night, that was a missed opportunity to be sure.  Another win behind them now, the Canucks have 3 days to rest before travelling to Edmonton (and that will be good for Willie Michell who is no doubt feeling it after the gutless hit from behind by Evgeni Malkin, who played a half decent game last night despite the embarrassingly bad goal that helped him bump an 11 game goal drought.  That's what you gotta do when you can't pop 'em in...  The Matt Cooke goal was a joke though, as Luongo was clearly run by Jordan Staal.  The outrage by Pens fans after Darcy Hordichuk ended up on top of WHL call up Alexander Pachurski was as comical as it was misguided.  If you're worried about the kid getting hurt, you might want to advise your Dmen not to dump guys on top of him.  Nice sucker punches to the back of the head by Eric Godard, btw.    Pachurski was quite a story, though.  In net for the Tri-City Americans the night before, and thrust into the game after rookie John Curry gave up 5 goals on 14 shots was impressive as he let in 1 on 13 including bravely staring down a point blank Sami Salo slapshot.  Well deserving of 3rd star honours and no doubt it will be a game he remembers always.  As for Curry, I don't think anyone should be dumping on the kid.  His defense left him hung out to dry all night, especially Sergei Gonchar, who was a -4.

Sean has more post game wrap-up if you haven't yet read it, and no doubt the Burrows drama is far from dying, especially with the news the league didn't speak to Canucks G Andrew Raycroft.  Burrows skated to Raycroft immediately after the event and told him what was said, so why didn't the NHL even talk to him?  More on this as it develops at your source for Canucks news and views: Nucks Misconduct.