On This Day In Canucks History: January 17

Share All sharing options for: On This Day In Canucks History: January 17 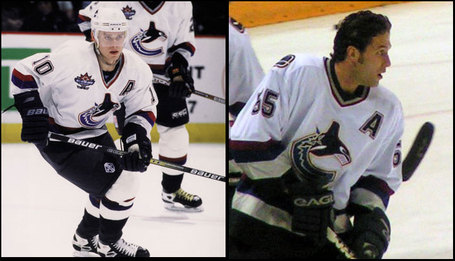 January 17th, 1999: Vancouver acquires Ed Jovanovski, Dave Gagner, Mike Brown, Kevin Weekes and a first round pick in 2000 (your friend and mine, Nathan Smith) in exchange for Pavel Bure, Bret Hedican, Brad Ference and a third round pick in 2000 (Robert Fried).

Trading the most exciting player in franchise history (who had told then-GM Brian Burke he wouldn't play for Vancouver again) wasn't easy. But landing Jovocop in the deal would be a boon for Vancouver as he would be their #1 defenseman during the rebuilding years and a key part of the team's resurgence in relevancy during the early part of last decade.

Gagner would retire at the end of the 1999-00 season. Brown would leave Vancouver for Anaheim and Chicago before retiring in 2005. Weekes wouldn't stay with Vancouver very long, being traded in December (along with Dave Scatchard and Bill Muckalt) to the New York Islanders for Felix Potvin.