Monday Morning Coffee: 78% Laser free or your money back

Share All sharing options for: Monday Morning Coffee: 78% Laser free or your money back 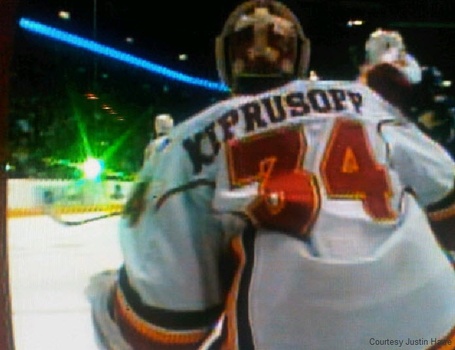 Good morning Canucks fans.  Ok, I know we are all pretty sick of all this, so let's get this out of the way and on to the important stuff.  JJ Guerrero over at Canucks Hockey Blog has an excellent write up on what actually was happening during this whole event, including the revelation that the culprit actually wasn't apprehended.

Anyways, back to the stuff that matters, the Canucks actually have a game tonight.  They're sure to have their hands full too, as they take on the Nashville Predators at GM Place.  I like this match up, lately: 2 teams with great speed and goaltending, and a little bit of attitude.  Their records are almost identical, but there are some key differences that could a key to the Canucks getting 2 points and a possible leap back into the drivers seat in the NW tonight.  The Preds have struggled with special teams this season, and the Canucks would do well to play a disciplined game and take advantage of the Preds PK, currently clicking along at a rate of 77.4%  Their power play isn't much better at just at just 16.4%, so it won't be a shock if the Canucks continue their strong PK work.

The Preds are a little banged-up at the moment, and will be without Jason Arnott tonight, he suffered an upper body injury in their 3-2 loss to Anaheim.  Sami Salo should be back in the lineup after that cut he suffered Thursday at the hands of Willie '8 1/2 feet of stick' Mitchell.  This was supposed to be the game that saw the Canucks welcome Pavol Demitra back to the Canucks lineup. Jason Botchford of the Province says that we likely shouldn't expect him until Saturday when they host Sidney Crosby and the Pittsburgh Penguins.  Make sure and check back for a complete pregame post here at Nucks Misconduct.

An interesting week ahead for the Canucks, tonight's game a big one (especially with Calgary facing Colorado) and a rare January road game Wednesday as the Canucks head to Minnesota for a date the Wild.  The Saturday matchup against the Pens wraps things up, and Sunday they have the Super Skills competition at GM Place before 3 days off.  3 very winnable games overall, the Canucks really laid it to the Preds last time out and with Arnott out of the lineup, the Canucks should be able to handle them if they put forth an effort similar to the one the last time these 2 teams met.  Minnesota is playing better of late, but are still giving up an uncharacteristic amount of goals (didn't some Wild journalist say that Minnesota had the top 2 goalies in the NW division??  Yes, the guy actually ranked Josh Harding ahead of Luongo and Kiprusoff.  On the other hand, it's nice to see that being bat-shit crazy doesn't prevent you from getting a journalism job in Minnesota, so keep that in mind, kids).  They did pull off an amazing comeback Saturday that I am surprised isn't getting more play (must be Lasergate): Down 5-1 in the third to the Chicago Blackhawks, they popped 4 in the 3rd, and then got the winner in the shootout from grizzled veteran Owen Nolan.  Considering how much was made about Chicago's 5 goal comeback against the Flames earlier in the year, you'd think we would have heard more about this.  Even more shocking, the next night the league's most high powered offense got shutdown in... Columbus???  A week ago we were anticipation the head of Ken Hitchcock, now they are playing more like the BJ's of last season.  Unreal, and it shows that perhaps there may be a few weaknesses in the armor of the Hawks.  Can anyone say primed for a 1st round upset?  In the Western Conference anything is possible.

Finally this morning, I want to give a shout out to an excellent dude and an always entertaining blogger, Trevor at Internet Trashcan.  He has a couple great articles you should check out, one on who thinks Henrik Sedin is a good bet to win the Hart trophy and why (as well as giving some jerk credit for starting all the buzz on the 'net :p) and his always entertaining Canucks Week That Was .  Thanks, and congrats on being added as a blogger on the Fan Zone at Canucks.com. Trevor!