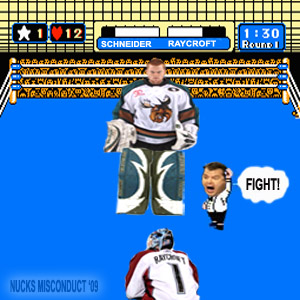 From a competitive standpoint, it's on!

Schneider sounds nearly possessed to make the Canucks squad this year. His time is now, after being the AHL goalie of the year and a wall in net to help the Moose reach the Finals last season. I watched him play in those final 2 rounds and it really was a sight to behold. Schneider's speed in movement and reflexes was phenomenal in dire situations, but in general he plays the butterfly style so well that he makes it look easy out there.

Schneider realizes that Roberto Luongo is the man in Vancouver and is aware that he is potential trade bait, but that doesn't put him into a state of mediocrity to fight for the backup spot. He pushes himself further. He wants to be better than Luongo. He wants to become a starting goalie in the NHL.

It's great having Andrew Raycroft here. It just adds that extra motivation for Schneider.

There's so much talk about whether or not to trade the kid. Let's just see how he fares in training camp and in preseason games first. I have a feeling we are going to see something special from him.

More from Schneider here (worth the read).

(Yes, I've been playing too much Mike Tyson's Punch-Out lately). Well, you can too.