Pick The Rival: The Northeast Division

Share All sharing options for: Pick The Rival: The Northeast Division 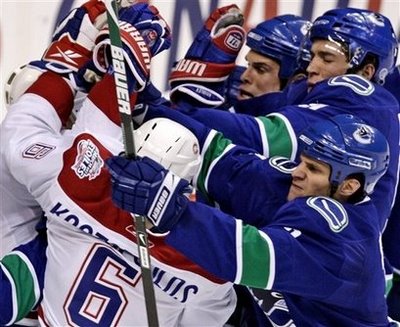 So far we've established that Vancouver fans have a bit of a problem when it comes to Ovechkin and the Caps as well as anyone donning a Rangers dress jersey.

Let's close out the East and turn our rival attention at the Northeast Division. Come along as we review what is commonly accepted as Vancouver's worst trade in franchise history, take a peek at a line brawl or two, remember the glorious "Vote For Rory" campaign with enough time left over to still hate on Alexander Daigle and watch Greg Adams send the Canucks into the Stanley Cup Finals in 1994.

June 6, 1986 anyone? Maybe the exact date doesn't ring a bell, but a deal for Barry Pederson in exchange for some clown a mother named Cam Neely and a 1st round pick that turned into Glen Wesley probably should. For good reason, many still call this Vancouver's worst trade ever since it's not often a team that can't score loses the prototypical power forward of his generation. Not that Pederson was bad (two back to back 50 assist seasons ain't bad at all) but Cam Neely he wasn't. Pederson was traded a few seasons later to Pittsburgh where he won a Cup in 1991. Cam would go on to be the man in Boston, land in the HHOF in 2005 and - most importantly - give you a reason to like seabass again.

In the past decade Vancouver is 4-4 with three ties and two OTLs against Boston. However, Vancouver has failed to score against Boston since a 5-2 win in 2005; in 2006 Boston blanked them 2-0 and early last year Tim Thomas shut them down again in a 1-0 snoozefest.

Fun fact: Glancing at the franchise records shows the Bruins are one of a few Northeast teams that have historically pwned Vancouver. The Bruins have scored the third highest goals against the Canucks (4.07 a game) while, in return, the Canucks have scored the fourth fewest goals per game against the Bruins (2.78 a game). You'll have to wait until we get to the West to figure out, historically speaking, who Vancouver can't score against even if their lives depended on it.

And, for no particular reason, here is second-timer-around Dave Scatchard forcing then-Bruin Joe Thornton into his first fight (I forgot Thornton used to look more like a surfer than a hockey guy):

Buffalo and Vancouver have hooked up for a few notable trades: Mogilny for Peca, Wilson and a first rounder (that turned into Jay McKee) in 1995, Brad May for Geoff Sanderson in 1999, Mika Noronen for a pick in 2006, Taylor Pyatt for a pick in 2006 and finally the Holy Bernier for a pick in 2008. Vancouver is 6-4-1-1 in the past decade against the Sabres though, honestly, none of them truly jump out at me except one: two years ago Dany Sabourin came ridiculously close to winning his first NHL game before the Sabres (then the best team in the East) stormed back, scored in the final minute of the game and won 4-3 in the SO. Let's not forget Rory Fitzpatrick either, the blue collar defenseman who gained notoriety three seasons ago during the "Vote For Rory" All-Star Ballot laughter we all had, laying the groundwork for Montreal's ballotbox stuffing initiative last year.

Fun fact(s): The Canucks first ever franchise road victory was a 4-1 win in Buffalo in October 1970. In that same game, Canucks goalie Dunc Wilson stopped the team’s first penalty shot against the Sabres Paul Andrea.

Also, in 1996 Mogilny became the 4th player in history to score 50 goals for two clubs (Buffalo/Vancouver). Hell Buffalo also can add Pat LaFontaine to that group too (NY Islanders/Buffalo)

Lastly, I present you this gem of a line brawl from over a decade ago. Forget Chicago, this one has it all: besides the Messier-led Vancouver team getting smoked, Sean Burke is hitting something that isn't his wife, you have Brashear jumping Peca and then another Sabre before it's all over, a young looking Hasek happy as hell he's on the bench and the announcer ends the clip telling Keenan and the Canucks to basically go fuck themselves. Bonus points: if you look real quick at the end of the clip you'll see a confused looking Bure on the bench too. Again, an absolute beauty.

Les Habitants is probably the extent of my French language capabilities (wait, not true, I can probably say 'Les Miserables' correctly after two failed attempts).

I suspect the Canadiens will be an instant vote for some just based on cultural or regional hate. I can dig that (I dig all kinds of irrational hate). But let's look at the positives: in 1990, Montreal was kind enough to trade Jyrki Lumme to Vancouver for a second rounder that turned into Craig Darby who Vancouver would later reacquire in 2005 but never use. A year later they sent over Gerald Diduck for a fourth rounder (Vladimir Vujtek). Both Lumme and Diduck were big pieces to the 94 team (and Lumme is up there with Ohlund in franchise defenseman point records). In 1996 the Habs sent over Donald Brashear which guaranteed some McSorley-esque fun for a few seasons.

Now the bad news (which I'll put under the fun facts thereby making it seem more upbeat than it really is):

Fun fact: Vancouver's first trip to the playoffs came in their fifth season (in the old Smythe division). They won the division and earned a bye, so they lead off the second round against the Canadiens who beat them in five. The Canucks first ever playoff game? A 6-2 loss in the Montreal Forum. I haz a sad.

Stepping back, look at the franchise record between Vancouver and Montreal above. See those 67 points? That represents the worst points percentage Vancouver has historically against any team. In other words, when considering the frequency of games and the win/losses over the past four decades, no one beats Vancouver more efficiently than Montreal. I'll wait while you grab the gin. No need for the glass, just imbibe from the bottle.

Now that I have you upset, let's get a smile back on yer mug with another old school line brawl (I think it's from 1987) and wait until 4:35 for some, um, quality Montreal trim to make a showing. Heck let the video run until the end for some bonus Jets/Flyers violence too.

Another Canadian team, so here's another chance to cultivate some family-friendly hatred. Case in point:

Ottawa Senators: Probably the worst and gayest team to ever play a game in the NHL.

If you ignore the Shannon/Nycholat deal from last summer, I believe there's only been one other trade between Vancouver and Ottawa and that involved your favorite duct-taped soul Sami Salo. Back in 2002 Vancouver acquired Glass Joe in exchange for Peter Schaefer which turned out to be a good deal since Salo is still (some would say regrettably) a top four player while Schaefer spent last year playing for the Providence Bears (Boston's AHL affiliate) and was bought out by Boston this past June.

In the past decade Vancouver has an 8-7 record against Ottawa and hasn't lost to them since March 2004.

Fun fact: Alexander Daigle's short lived entertainment company, Imposter Entertainment, has the most annoying website navigation I have ever seen. And, if you're so inclined, his email address is still listed. Do wish him the best with his HC Davos career.

The last Canadian team in the division (alphabetically anyway) is probably the one that's going to irk the most folks. I'm the worst person to explain the Leafs hate because I'm a xenophobic American who can't read and owns many, many firearms. Could be the whole "center of the universe" thing or maybe it's literally maple leaf envy, I don't know. I'd say ask Zandberg but he used to like the Leafs so I'm afraid we're both equally useless.

The Leafs were kind enough to send over Tiger Williams and Jerry Butler in exchange for Rick Vaive and Bill Derlago in 1980. Tiger Williams is heavily respected in Vancouver lore (though his particular brand of goal celebrations looks creepier with age). I couldn't validate something I saw on Wikipedia, but they claim Williams still holds the record for most penalty minutes in the playoffs for both teams (not too far a stretch considering he still holds the league career record for most PIMs by a single player). Fast forward to 1995 when Toronto swapped Mike Ridley in exchange for Sergio Momesso (Ridley played two seasons for Vancouver before retiring while Momesso's stop in Toronto was a forgettable 54 game affair). The teams have had a number of smaller deals over the years (for failed prospects on both sides) and fans for both will forever be able to bicker when the names Felix Potvin, Kyle Wellwood, Mats Sundin and Brian Burke come up. Fine, Dave Nonis too.

In the past decade Vancouver is an even 8-8-2-2 against the Leafs but hasn't been on the losing end against them since 2003.

Fun Fact: Vancouver's first ever NHL victory? The second game in their inaugural 1970 season, they beat the Leafs at home 5-3. Wayne Maki scored two goals in the effort.

And since we already brought up Potvin, enjoy watching Greg Adams beat him in the second OT of the 1994 Western Conference final to send Vancouver into the SCF against New York: