You've probably noticed the rest of the SBN Hockey crew have been running a month-long series of team previews. If we don't do it, James Mirtle bullwhips us something fierce.

What's nice about Vancouver being second to last alphabetically is it gives us time to prepare (by which we mean wait for the damn roster to be set). But the roster still isn't set, so whatever. We tried.

After the jump we take a look at what to expect from the 2009-10 Vancouver Canucks, including some team strengths and weaknesses, who will be under pressure to produce and why and what defines the official 2009-2010 drinking social where you pound a beverage and then sob quietly to yourself in the corner. It's Canucks hockey after all, you knew the rules before you got here.

Where We've Been (2008-09)
Last summer started off with an airing of grievances from management: firing GM Dave Nonis, replacing him with a player agent with no experience, letting Vigneault toss in the wind for weeks on end and telling Markus Naslund and Brendan Morrison to go piss up a flagpole.

Thus there was a level of uncertainty when the season rolled around, but everything (shockingly) was fine until a certain goalie heard a certain "pop" during a 3-1 win in November against Pittsburgh. With Roberto Luongo down and out with a groin injury for nearly two months, Vancouver tried to stay above water by icing a rookie goalie (Cory Schneider) along with back-up Curtis Sanford and added Mats Sundin to the mix up front in late December.

Sadly there weren't enough biorhythm bracelets on the planet to keep Vancouver from dropping a franchise-worse eight straight games in January. With a little help from Ryan Kesler and Alexandre Burrows, the two sparked some epic production on the first two lines and a healthy Luongo returned allowing the Canucks to run a 34-5-2 record after the January from hell and eke out the Northwest Division crown from Calgary.

The party didn't stop there. Drawing a first round match-up against a Cinderella St. Louis Blues team, Vancouver celebrated their first post season sweep in the modern era. However, that IS where the party stopped. Facing a deeper, faster team in Chicago during the second round, the Canucks couldn't keep pace and were ousted in six games.

Opening Night Roster (subject to change if Vigneault gets moody)

Team Strengths
1. Goalie - duh. Even if Luongo has another groin "issue", Schneider should be able to get called up and help hold down the fort. Raycroft has to play just north of "absolute travesty" and buy management time to find a Labarbera-type solution if all goes to hell. But let's not be negative; Luongo will play 70+ games again and give them every chance to win, night in and night out.

2. Emerging Talents. The increased offensive tasks given to Alexandre Burrows and Ryan Kesler paid dividends, as both players had career years. I don't know if they can exceed what they did last season, but even if they equal that it would be very beneficial, especially in taking the heat of the Sedins to provide all the offense. Now is the time for Kevin Bieksa and Alexander Edler to strut their stuff with Mattias Ohlund leaving town. I believe Edler especially is going to have a great year. This also depends on how much power play time the new guys like Christian Ehrhoff and Mathieu Schneider get (and perhaps how well Sami Salo's body holds up). I would let Edler step up and not hold him back. He's ready.

Team Weaknesses
1. Bottom six - It's better than it has been in the past, but the bottom six forwards aren't the deepest bunch. Wellwood has shown up in far better shape and it's expected Bernier and Hodgson, Hansen, Shirokov or Raymond will fill out the third line. There's a lot of promise and intrigue in there, but not so much actual production on an NHL scoresheet. Bernier and Wellwood alone will need huge seasons. The fourth line - likely Rypien, Johnson and Hordichuk - provides plenty of muscle and short blocking goodness, but little else. Hordichuk remains a liability on most nights.

2. Size up front. This could be nitpicking on my part, but if you look at the Canucks' depth chart below, there leaves a lot to be desired as far as girth goes. Fortunately, these guys play with tenacity regardless of that. 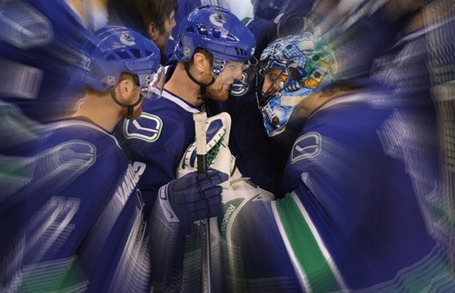 Go big or Go Home
The pressure is firmly on the Sedins and Luongo now. Gillis did his part this summer by flying out to Sweden to convince the Sedins to stick around and then assembled a more talented defensive crew in front of Luongo before he signed his life away. If Vancouver has any chance of doing real damage in the playoffs, first these three need to lead them there and, once in, have to perform like the All-Stars they are. No more failures at crunch time. 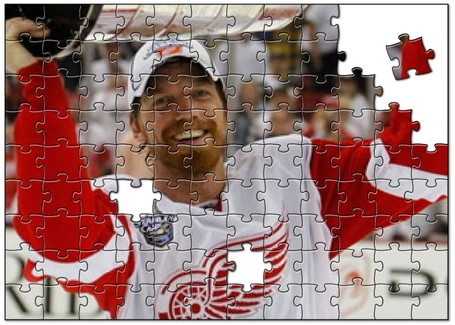 The Missing Piece?
Gillis admitted to coveting Mikael Samuelsson for a long time. So while likely getting a shot to play with the Sedins (or at least bump Burrows out of that slot) he'll also be entrusted with oodles of power play time and, just as important, to impart Stanley Cup wisdom from his time in Detroit to a bunch of guys who have never touched that big silver cup. All of that from a guy that Detroit fans recall fondly as a streaky player with defensive liabilities. I love it when a plan comes together! 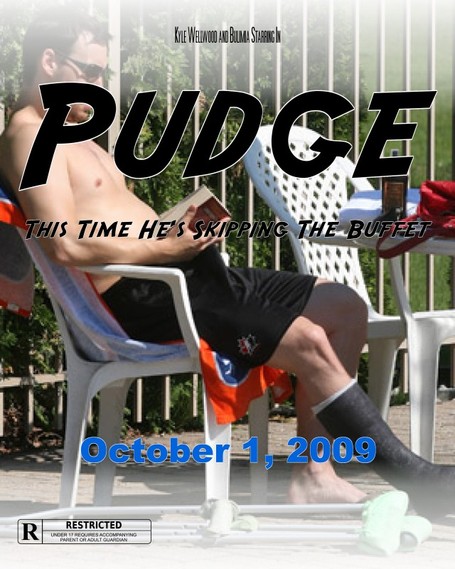 There's Less Of You To Love
Three lords of the buffet - Kyle Wellwood, Steve Bernier and Shane O'Brien - had their own individual problems last year, but their weight was one of the biggest (rimshot!). After Gills patiently resigned all three (very patiently with Pudge we must say) he must have left them a post-it note regarding their, um, magnitude of force that must be applied in order to support them in earth's gravitational field. All three seemed to have heeded the boss' decree: Pudge is down 20 pounds, Bernier dropped 15 and SOB is reportedly in the best shape of his life. 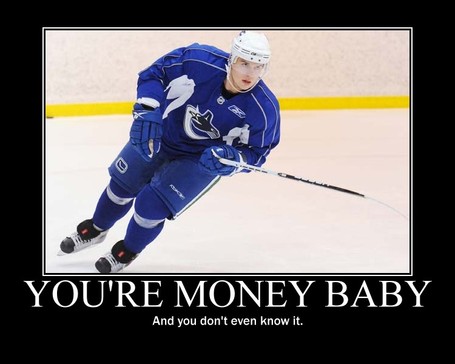 From Russia With An Ample Amount of Love
Sergei Shirokov has gone from literally a no name player just a few months ago to reminding people of Pavel Bure (no pressure at all). But for a guy who was locked in obscurity over in the KHL to have such a litigious summer only to land on the shores of Vancouver and blow everyone away with his play is the best feel-good story of the preseason. If he makes the cut, odds are he'll quickly become a fan favorite, forcing people out of their sushi-encrusted lower bowl seats to their feet in a single breakaway. But, if he does make the roster is that bad news for... 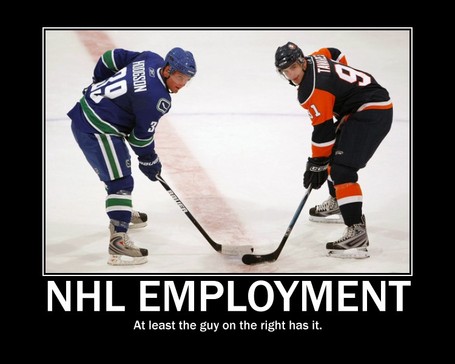 Oh Noes Coho
...Mr. Cody Hodgson? The odds-on favorite prospect who had such a sick year last season has stumbled badly out of the gate at the NHL level. First he got injured. Then when he started getting in games the results have been less than inspiring. With the emergence of Shirokov and the strong play of bubble players like Mason Raymond and Jannik Hansen, it's now possible to see Cody getting cut or playing nine NHL games before being returned to juniors (Brampton). 1:45 PM ET Update: That's exactly what happened; Hodgson has been returned to Brampton and is now ineligible to be called back up to the NHL for the rest of the season. Just goes to show ya: it ain't ever easy being a Vancouver Canuck first round draft pick. Just ask Michael Grabner and... 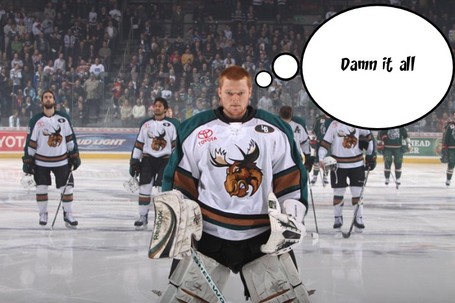 Bitch You're In My Seat
...Cory Schneider. Poor Schneids was picked in the first round back in 2004 and heralded as the goalie of the future. So far he's held his up his end of the bargain, helping the Canucks stay afloat when Luongo was hurt and winning the Aldedge "Baz" Bastien Memorial Award as the best goalie in the AHL last season. But with Luongo's lifetime contract, the question has flipped from "when" to "what" in regards to Schneider. Does he play back up this year so Gillis can show him off? Does Facepalm Raycroft outplay him and force another AHL season down his throat (update: yes, yes he does)? One thing's for certain: sooner or later Cory will be moved. 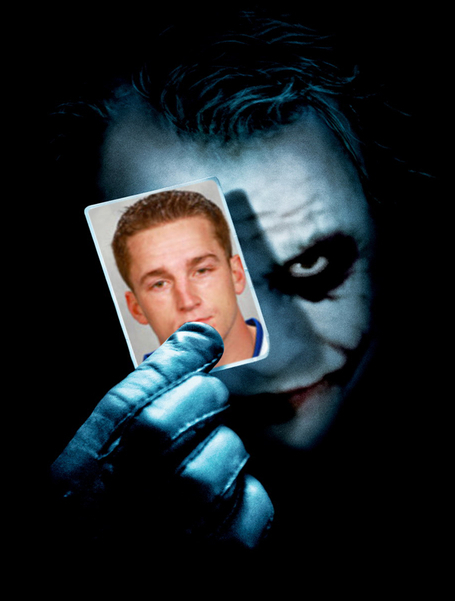 The Definition Of Wildcard
Rick Rypien has had some trouble staying healthy (and last year dealt with some off-ice issues as well). And now he has "the flu?" But when he's in the line-up, he provides the team with one of the best middle weights in the game on top a forward capable of some highlight reel offense (see defense exhibit A and defense exhibit B). As much of a fan favorite as Ripper has become, he's only played 41 games in four seasons, never eclipsing more than 22 games a season. Will this be the year his body remains intact and, if so, will he become a diamond in the rough type player like Burrows or will he be relied upon solely to make the Zack Stortini's of the world regret life? 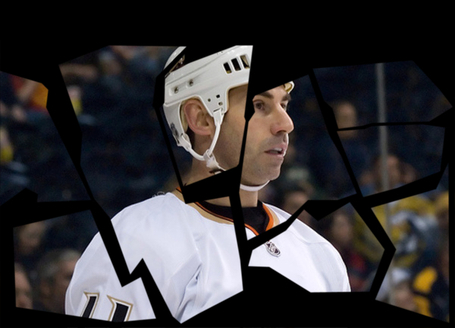 Paging Dr. Feelgood
With Mats Sundin over in Europe enjoying married life (do Swedes put herring on the doorknob when they want privacy?) Vancouver elected to find someone even older to help them out: Mathieu Schneider. Father time has spent most of his summer rehabbing his shoulder following surgery at the end of last year and, to little surprise, will start the season on the IR. Joining him on the IR will be the often-injured Pavol Demitra who is recovering from some rotator cuff troubles. Get used to hearing those two names and IR together.

If Sami Salo joins them, that's your official Vancouver Canucks 2009-2010 drinking social. If (when?) all three are out with whatever vague upper or lower body ailments there are, you are hereby obliged to pound a beverage, walk yourself into the corner of the room and sob quietly least you wake the neighbors. 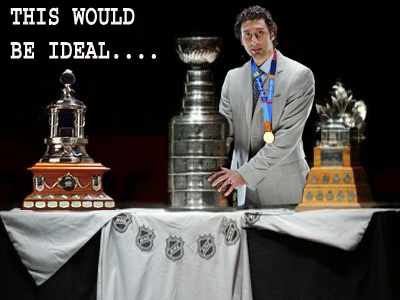 Prediction for 09-10 season
Mike the Yank says - First place in the Northwest, but they'll need to gel as a group quickly and survive the league's longest road trip in the process (puke). The forward ranks are easier on the eyes, I'm loving the injection of youth and the fact Bernier and Wellwood came to camp ready to prove their critics wrong. I also dig our defense will be firing cannons left, right and center and even if a more offensive-minded blueline leads to some defensive lapses, we got 12 more years of "no fucking way" saves courtesy of the captain. But the roster isn't that deep: a key injury here or there will cause some major problems. And a Sedin or Luongo-level injury would be a disaster. If the secondary support from Kesler, Samuelsson, Burrows, Bernier, Demitra et all drys up, they won't keep pace with the elite in the West.

Sean says - A tight battle with the Flames for first spot in the Northwest with Vancouver barely holding the edge. 3rd in the West, possibly 2nd. If Luongo's groin fails him again, all bets are off and I become an alcoholic. Personally, I'm expecting great things from Lou and this team this year. Drop the damned puck already!