Share All sharing options for: Hansen Breaks Hand In Fight With Brule 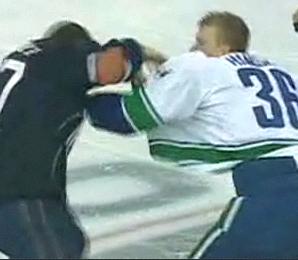 Oh that's perfect timing. Jannik Hansen has been playing sound hockey lately, and his tilt with Gilbert Brule was fun to watch, but this is unfortunate.

"First look, doesn't look good, but we'll see tomorrow. He's one of the toughest Danes I've seen. It's not the first time he has fought. In this game, you've got to stand up for yourself every now and then." -Alain Vigneault

This only complicates the decision-making process for Canucks management. AV was saying post game that he was projecting Hansen to be a bottom 6 forward (obviously), and that now, depending on the seriousness of the injury, even more decisions have to be made. The Vancouver Sun suggests that this may open the door for either Cody Hodgson or Tanner Glass. I would suggest Tanner Glass.

With 2 more assists tonight, not only did Sergei Shirokov lead the Canucks in preseason scoring (7 points in 4 games), he also solidified a roster spot barring something insane from happening.

“My knee is sore,” Shirokov said Sunday after the game. “But I play, I practice. I see guys are hardworking. I’m happy to play with this team and try to make NHL. I’m happy with Vancouver jersey, happy with these guys. It’s good.”

-Alright, hold on to your butts. There's going to be a lot of news between now and the Canucks' first regular season game on Thursday.