Sweet merciful Ehrhoff, real hockey starts in less than two weeks and there remains much to talk about with the Canucks. Who stays and who goes? Burrows or Samuelsson on the first line? Schneider or Raycroft in net? Hodgson or Wellwood on the third line? Lukowich or O'Brien in the top eight? Mila Kunis or Megan Fox just because?

See? Big questions. To help analyze the issues, Sean and I got together with some notable Vancouver bloggers for a round table discussion, including the great folks behind Canucks Hockey Blog, Canucks Corner, Canucks Army, 24 Hours and The Sports Corner.

Click through the jump to check out the group's take on what to expect from Ryan Kesler following his breakout year and what the future holds for Cory Schneider.

The questions posed to the group in the first part of the roundtable were:

1. Is Ryan Kesler coming into his own or was last year's productive outburst more the result of Mats Sundin playing on his line?

2. With Luongo here until the next ice age, what is Cory Schneider's best value to the franchise right now: back up or trade chip? 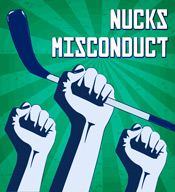 Sean Zandberg, Nucks Misconduct
1. I'm a little torn on how Kesler is going to perform offensively this coming season. In 2005-06 he scored .28 points per game. In 2006-07 he scored .33 points per game. In 2007-08 he managed .46 points per game. Last season he scored .72 points per game. That's drastic increase, and many of those points came after the RPM line was formed. Mats Sundin (and even Pavol Demitra) did help Kesler offensively but, Kesler was also given a bigger scoring role. I think we'll see Kesler max out as a 60 point player, even without Sundin. as he is 25 years old and is still maturing. I don't see much more upside to him than that. Hope I'm wrong, but he is a Selke nominee after all. He plays a 2-way game.

2. The Schneider issue is a tough one. After his brilliant performance in the AHL last year, it's just a matter of time before he becomes a starting goalie in the NHL. I think he'd fit in well with a 2-tier goalie system in the NHL right now to help his maturation process. I don't think Luongo should play less games so that Schneider can play more. Lou thrives on more games played and he has made that clear in the past.

If he's traded, it would be out of mercy so that he can get those minutes elsewhere. But then who would start in Manitoba with Andrew Raycroft backing Luongo? I'd keep Schneider around this season at least until the overall goaltending issue in Vancouver and Manitoba is resolved. His value can only go up from here (hopefully). My opinion on this wavers I'll admit.


Mike The Yank, Nucks Misconduct
1. Forget Sundin, Kesler is definitely coming into his own. He crushed his shots per game and points per game pace over the last three years and earned that Selke nod at the end of last season. Sundin was beneficial because he drew more defensive attention away from Kes but, more important than that, I'm sure it was an exchange of intangibles like experience and leadership that Sundin shared during his 30 seconds in town that will help round out Kes and his game. I actually expect him to have fewer points this year, but his play will remain elevated and - couple in the fact it's a contract season - it'll become obvious quickly how strong a player he's become now.

2. Sadly, Schneider has to go. No chance he's going to waste away behind Luongo. But he'll have to live in the uncomfortable nature of this marriage for a bit of time. I don't care what Raycroft does, I have zero faith in him as as back-up. Schneider needs to first earn then accept his role as the back-up and get more NHL experience under his belt. Hopefully there will be plenty of time (that massive road trip in the winter comes to mind) that he can get in there. I'm sure Gillis has some feelers out there, but you have to keep Schneider for now and let him showcase his stuff. Maybe towards the deadline you move him. Or you wait until a Labarbera-type back-up is available on the cheap and you pull the trigger then. But the goal should be two-fold: get Schneider more experience and keep Raycroft firmly ensconced in Manitoba.

Cam Davie, Canucks Army
1. He definitely came into his own, but I think that was sparked primarily by the presence of Sundin. I think it has more to do with Sundin coming on board, that it does Kesler doing this all on his own. Starting January 1, Kesler's goals, assists and points per game stats all went up dramatically. He was also taking more shots per game. In fact after the All-Star Break, Kesler went 17-17-34 in 34 GP. That's a GREAT pace, but it's sure a lot easier to get more shots and score more points when you have a horse like Sundin on the ice. The test for Kesler will start October 1st. We know he can do it, but will he?

2. Schneider needs to be showcased in the NHL now --- then traded. It's great that he won the AHL Goaltender of the Year, but there is a noticeable leap from the minors to the NHL and I think that most NHL coaches and GM's are very aware of this. Schneider has had this weird trajectory throughout his playing career, where he starts poorly at a particular level, then rebounds and does incredibly well. He did in college, he did in the AHL, and he's likely to do that in the NHL. With that said, once he proves himself as a solid NHL goalie, after 10 games or so, it's time to ship him out. I would suspect that he will be traded either around Christmas or at the trading deadline. The Canucks should be able to get some good value for him. He's a confident, smart kid with loads of talent and upside. That's a valuable asset to any team. Well, any time that hasn't just signed their goalie captain to a 12-year extension.

Brian Wawryshyn, Canucks Corner
I think there is little doubt that Kesler is coming into his own, not only as a player, but as a leader on this team. He wants to win and that was evidenced by the fact he spoke about players taking less to be part of a winning team. We'll see if that holds true when/if he signs his extension. He does need someone to play with though, because I don't think he's the type of player that is THE key to a line, but he's one hell of a complimentary player. In my opinion, if Kesler has a good line to support him, he's capable of 30 goals and being the responsible defensive player that saw him nominated for the Selke last season.

2. I think the ideal situation is to have Schneider start the year in Vancouver as Luongo's backup and then hope he shines when he gets his chance. There probably aren't that many takers right now with every team knowing that eventually the Canucks are going to have to cut ties with Schneider, if not by trade then when he becomes a free agent, because there is no way he signs in Vancouver again with Luongo here for life. Once the dust settles and we get into the season, teams may see the value of Schneider if he plays well and start making some calls to Mike Gillis.

We all know how patient Gillis is and the fact is he doesn't need to do anything with Schneider right now. Not a bad problem to have.

JJ Guerrero, Canucks Hockey Blog
1. I think it's a bit of both.  Kesler showed glimpses of what he can do offensively when he scored 21 goals in 07/08.  That he was able to build on that is a good sign that he has more offense than Canucks fans originally gave him credit for.  But at the same time, I don't think he would have been able to do it without Mats and Pavol drawing defenders and creating space for him.  The question going into this season is whether he could produce similar numbers without those two players playing next to him (at least without Pavol for the first part of the season).

2. I'm in the minority who doesn't believe Cory Schneider will be traded this year.  The fact is, the only other NHL-caliber goalie in the organization (besides Luongo of course) is Andrew Raycroft, and after disastrous stints in Toronto and Colorado, calling him an NHL-caliber goalie might be a stretch.  Unless Mike Gillis has plans to bring in another goaltender, he won't trade Schneider.

I think the best-case scenario is if Schneider wins the back-up job behind Luongo and proves that he can play in the NHL.  At that point, he'll bring the most value in trade.  Gillis can afford to be patient - remember that Schneider's only 23 and is still an RFA at the end of the season.

Rich Loat, Canucks Hockey Blog
1. Ryan Kesler was coming into his own before Sundin finally arrived and while there were the many intangibles that can be attributed to Sundin's play which may have aided Kesler.  However he's been developing on his own over the last few years and I think his productive outburst towards the end of last year was more so him elevating his play down the stretch than it was a result of Sundin's timely return.

I expect Kesler to return to where he left off last year and have an even better year as we haven't really seen what Ryan Kesler is capable of yet. Last year he started as the third line center and his point production increase can arguably be attributed to his elevation to the second line when given that top 6 forward ice time. With Kesler starting on the second line this year we're going to see what he's really capable of.

2. With the Canucks' backs against the cap Gillis' move to bring in Raycroft was a blunt statement that Raycroft was going to be the bench warming backup that played as many games as can be counted on your fingers. Cory on most other teams would be a lock for backup, however no one saw the Canucks landing a superstar goaltender in all those years we hailed Schneider as our next starting tender.

There's inevitably some injury in the pre-season, and there's more than a handful of teams that would love Cory Schneider as their goalie. I think Gillis' best play is to ship Schneider off in a trade because if you wait until he hits free agency you've already lost him.

1. Ryan Kesler's offensive outburst has nothing to do with Mats Sundin. Besides the season where he got injured, Kesler's point production has increased year by year, and I doubt that'll change this time around. He is still only 25 years old, with plenty more time to develop into a top-line forward, and if anything, he's the one making the difference on whichever line he plays on.

2. If the right deal comes along, Mike Gillis will most likely pull the trigger and move Cory Schneider. He's a solid trade bait and look for him to be shopped around closer to the trade deadline. Schneider is not NHL-proven, which might diminish his value a little bit, but any team in need of a future goaltender should look to Schneider first. There's very little gain in having the youngster sit on the bench behind Luongo, so him being a backup should be out of the question.