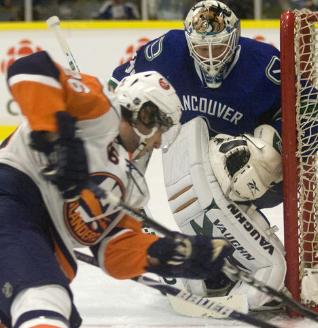 It's awfully early in the morning here and I'm tired of celebrating the opening night of hockey, so I'll keep this short.

-The atmosphere in Terrace was tremendous, naturally. It was great to see my neighbors from the northwest having such a good time, and I mean that in all sincerity.

-The game itself was a typical first preseason game. I can sum it up as thrilling, boring, awkward and violent all summed up into one.

-Sergei Shirokov delivered the goods, scoring both Canucks goals. He's so opportunistic. I thought he played very well in the offensive zone, yet inconsistent defensively. We expected that though. That was his label when he arrived here. I could see that he was trying to play a 2-way game so there is hope there. He has a poise though. He's more mature than I thought.

-Andrew Raycroft was stellar. Sure, he allowed Jon Sim's goal, but it was a perfect backhander to the top corner, where Rayzer is notably weak. Cory Schneider didn't face as many (quality) shots, but he looked sharp regardless. The battle for Roberto Luongo's backup spot is on, no doubt.

-Kyle Wellwood looked slicker and quicker. At the same time he seemed overly confident. Agree?I thought he was holding onto the puck too long and being over-fancy.

-Brad Lukowich seemed solid. I thought he was exactly as advertised: RELIABLE in his own end and plays a physical game. I can't see him not making the team in October.

-Rick Rypien is a beast. Period. Andy Sutton may be twice his size, but after eating 2 Ripper blows to the face during their tilt (Rypien's second fight of the night), Sutton crumpled to the ice like Tommy Morrison fighting Razor Ruddock.

-Jannik Hansen does not look out of place, at all. He just couldn't capitalize on the scoresheet.

That's really all I can say at this point. The game started wide open and then settled into tighter checking as it went along. Many players looked tight and nervous. The lack of chemistry on many lines was evident. The fights made it more entertaining as the end-to-end action ceased. It is preseason after all.

More on the game from a guy who was there in person: Joe Pelletier.