Henrik Sedin: "I will try to beat him."

Share All sharing options for: Henrik Sedin: "I will try to beat him." 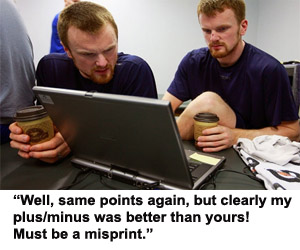 Unless they are separated, their points will remain about the same. Henrik told Hockeyexpressen that he's used to the pressure of performance, regardless of their new contract. The pressure has been there since day 1. That being said, he/they still want to improve. You have to admire their progress and consistency. You also almost have to take an Advil if you even ponder the thought of one of these guys getting injured long term. But if Daniel hurts his ankle, then wouldn't Henrik feel ankle pain as well? Freaky.

In all honesty, at a $6.1 million cap hit each, they had better perform admirably even if the other is on the IR. Bring on the cursing in my direction for even suggesting such a thing.