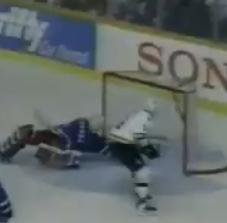 Ah, that infamous Game 6 in Vancouver. Ranger fans thought it was over, but the Canucks officially rallied from a 3-1 series deficit to win Game 6 and send it to Manhattan for the 7th Game.

In the 6th game, Trevor Linden was chopped down by a Rangers player and then hit by Mark Messier as he was hobbling to the bench. "He will play" chanted Jim Robson, referring to Linden playing in Game 7 because of his intestinal fortitude. Jeff Brown scored 2 goals and revealed that he had the name of his newborn daughter written on the back of his stick.

But what sometimes gets forgotten about that game was the Geoff Courtnall goal that went undetected with about a couple of minutes left. That would have made it 4-1 Canucks to seal the deal. The ref didn't think it went in and play resumed.

After about a minute Messier scored to make it 3-2. Ah, but luck was on the side of the Canucks. As Jim Robson put it: it was the first year that the NHL had goal reviews. While the Rangers celebrated, the ref called upstairs. It was then seen clearly that Courtnall's shot went off the back crossbar and the Rangers' goal was disallowed and the score changed to 4-1. A beauty goal it was. Rangers fans were really sweating by this point!

Below is some of the footage of that 3rd period. Listen to that haywire Canucks crowd at the Pacific Coliseum!