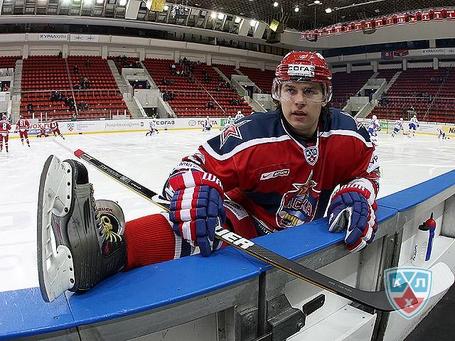 Another burgeoning NHL/KHL "issue" is unfolding half a planet away that may - as early as next week perhaps - deliver Sergei Shirokov into the Vancouver Canucks hands.

As talked about earlier this summer, Shirokov was rumored to have signed a deal with Vancouver but the problem has been his current KHL contract with CSKA Moscow. Shirokov, along with Colorado prospect Denis Parshin, were given qualifying offers they didn't sign and, instead, took the legal route to get more money or be formerly released from their contracts.

According to a Soviet Sports article (really? Soviet?) via RussianPropects.com (g/t to David Driscoll-Carignan from Mile High Hockey for the head's up), both players will be suspended from CSKA Moscow if they don't report to the team by midnight on Monday, August 10th. If suspended, Shirokov claims he will head to Vancouver to continue his career. Though he admits in the same interview his preference is to stay in the KHL, making the Vancouver card sound more like a legal tactic than anything else.

So, depending on the next few days, there's a small chance the former sixth round pick will join the horde of potential third liners when training camp rolls around in a few weeks. Though one has to wonder if Shirokov, like Kirill Koltsov before him, is just toying with our fragile emotions and will remain in the KHL for the duration of his career.