Pick The Rival: The Atlantic Division

Share All sharing options for: Pick The Rival: The Atlantic Division 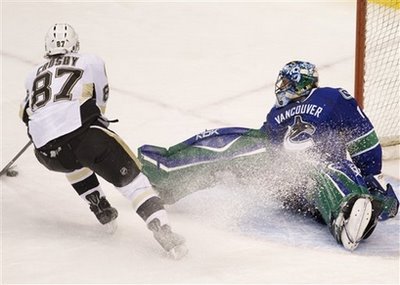 One rival down, five to go.

Now we turn our scopes on the Atlantic, home of the current Cup champs as well as the two teams that have beaten Vancouver in their best opportunities at said shiny Cup.

Do come with as we take a look at back at a time when Cloutier played better than Brodeur, recall why hating Mike Milbury is good for the soul, revel in the highs and lows of 1994 and fail to explain why there's so much animosity when there's a Pennsylvania team on the other end of the ice.

The Devils don't swing around to GM Place too often (only three times this decade: 2001, 2007 and 2009). With Team Canada's anointed goalies involved folks tend to focus mainly on the netminders: in 2007 the Canucks blew out Martin Brodeur and last season the Devils returned the favor by obliterating Jason LaBarbera and Curtis Sanford. Going back to 2005-06, Brodeur bested Alex Auld 3-0 and, in 2003-04, Dan Cloutier outlasted Brodeur 4-0 (sheesh).

The teams hooked up for a big trade back in 2000 when Alexander Mogilny (who still holds the franchise record for most assists by a right winger) got swapped for Brendan Morrison and Denis Pederson. A decent trade for both sides as Mogilny would help the Devils win the Cup that season and Morrison would serve as the team's #1 center for several seasons, though it's debatable if B-Mo was built for such a role.

Fun fact: Last year Vancouver and New Jersey had similar issues: along with both premiere goalies going down with injuries, they each won the geriatric free agency sweepstakes (Sundin and Shanahan) and both pried away former Wild wingers (Demitra and Rolston). Amazingly Vancouver won out on both ends of this: Demitra not only had more points than Rolston (53 to 32 respectively) but appeared in five more games. Sundin had 28 points in 41 games while Shanahan had 13 points in 34 games.

It's impossible to think about the Canucks and Islanders without revisiting the first ever bi-coastal Stanley Cup finals in 1982. Ignoring their poor regular season, Stan Smyl, Tiger Williams and the rest of the boys bulldozed over the Flames, Kings and Hawks to get Vancouver's first-ever appearance in the SCF. Sadly, Mike Bossy's side of the ice wouldn't be denied their third Cup in a row and dispatched Vancouver in four straight (Bossy himself was plain sick, scoring seven goals in the sweep and winning the Conn Smythe).

But if 1982 still burns deep in your memory I have two words for you: Mike Milbury. No stranger to diabolically poor trades, Milbury OK'ed the 1998 deal that sent Trevor Linden away for Todd Bertuzzi, Brian McCabe and a third round pick (who became Jarkko Ruutu). As you undoubtedly know by now, Bertuzzi eventually became Luongo (who Milbury also traded in 2000 along with Oli Jokinen for noted stalwarts Mark Parrish and Oleg Kvasha) and McCabe became Henrik Sedin. Linden only played one full season on the Island and returned in a separate trade to Vancouver three years later.

Today Milbury has set his sights higher, ruining hockey for another generation of fans while standing next to Pierre McGuire on NBC broadcasts. But, hey, at least he has a fan page ('one of a kind' indeed).

I'm not sure I know I can't I can be objective here. There's simply no shortage of bad luck, bloated contracts and failed promises that can inflict enough short and long term damage on the Rangers and their fans that would keep me content. Part of this is because I fell in love with this sport and this team during their 1994 run; another part is being subjected to Rangers media (looking at you Larry Brooks) and scores of their fan base - some of which need to be taught everything from your basic hockey 101 to the importance of deoderant - for far too long. A few years later the situation was worsened when Vancouver had to stomach the forgettable Messier years only to be followed afterward with fan favorites Pavel Bure and Markus Naslund last year slipping on the Rag blue.

It hasn't be all bad though. Watching a worn down Messier and a hobbled Eric Lindros simply whet the appetitie for the greater Sather errors in the shape of Holik, Trottier, Redden, Gomez and now Zherdev. Vancouver was also able to dispose of a dead weight R.J. Umberger (who didn't play for the Rags either) and deader weight Fedor Federov to the Rangers in two separate deals. And, if nothing else, you can smile that Vancouver has an 11-5 record over the Rangers since 1994, including last year's infinitely enjoyable 6-3 laugher at MSG. And to think they've tied much of their hopes to Gaborik now? Thank you Glen.

Fun fact: The recent advantage the Canucks have had aside, from a points percentage basis the Rangers have historically owned the Canucks. Only Montreal has taken more points from Vancouver than New York has in head to head match-ups.

And sure, let's digest some of 1994 SCF again, in order of the good, the bad and the downright ugly:

The quick eye will note that the Flyers have owned the Canucks to a similar degree that the Rangers have. In fact if you ignore the Wild and Thrashers then it's Vancouver who the Flyers have had the best points percentage domination over in their history. The past decade alone Vancouver is 3-7 against Philly with two OTL's. You need only go back to 2007-08 season where a visiting Flyers team put a 8-2 pile of hurt on Vancouver, complete with Ben Eager running amok (I know, shocking) and Jesse Boulerice trying to decapitate Ryan Kesler. Clearly, Philly's new vertical elbows will be right at home.

Fun fact: Some folks were chatting recently about the best Canuck fighters and Donald Brashear was right up there. So it's typical that it was the Flyers who received the Brash back in 2002 in exchange for Jan Hlavac and a 3rd round draft pick. The Brash would go on to keep fighting (often to hilarious proportions) while Hlavac turned out to be pretty useless. Also rendered useless was my Canucks Brashear jersey. Sigh.

Speaking of fisticuffs, please enjoy this 1981 clip of Tiger Williams and Bobby Clarke (sooo much yellow in this clip too. Go Flying V!):

If history is any indication, then Alex Burrows will eventually go the route of past pests Matt Cooke and Jarrko Ruutu and end up with a flightless bird on his chest in a few seasons. The Pens hold the historical edge, but the Canucks have done better recently, running up a 6-3-1-1record against Pittsburgh since 1998. We can also travel back to March 20, 1996 when Pittrsbugh GM Craig Patrick thought so highly of Alek Stojanov that he was worth some chump named Markus Naslund, a move Michael Farber of Sports Illustrated (I know, I know) called the worst trade in NHL history back in 2003 (far before the Luongo trade).

Similar to Philadelphia, there's an unusual amount of hate between these teams who rarely see one another. First, anyone remember the Canucks first game against Crosby in 2006? Bryan Allen and others spent 60 minutes pulverizing him (see Bob McKenzie's take at the time). Clearly not an original idea, but it laid the ground work for their 2007 meeting in which both teams combined for almost 40 PIMs (and Kris Letang scored the game winner in the SO) and their 2008 meeting where both teams combined for 108 PIMs and Matt Cooke along with Jannik Hansen were ejected 25 seconds into the first.

Fun fact: Crosby has 1G, 0A, -3 and 6 PIMs lifetime against Vancouver (only talking three games here). His one goal was against Alex Auld back in 2007, so outside of silly All Star events, he has yet to beat Robetro Luongo when it counts. His best chance was two seasons ago when Aaron Miller hauled him down during the OT: