Going On A Defender Bender

Share All sharing options for: Going On A Defender Bender

Yesterday was so crazy that I was fearful I'd wake up to learn MG recruited his local barista as the 11th blueliner.

No news yet. Perhaps he is more of a tea man.

So we have new lines to figure out, who mans the PP, which brittle defenseman (Salo or Schneider) will be the first to be injured and most importantly - who leaves now that the team has too many guys and is over the cap?

Here's an updated look at reality: 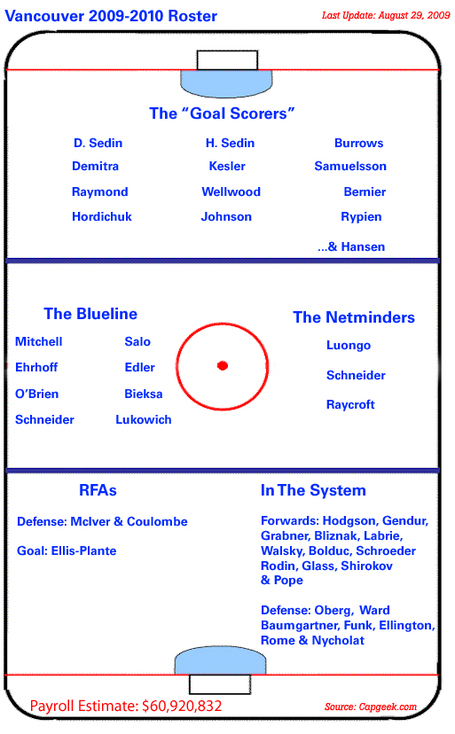 If you check out Botchford's piece from yesterday, he has a good look on life:

Today, the Canucks have 27 players signed for a total cap hit of $60.5 million, leaving the team $3.61 million over the salary cap. On Oct. 1 this roster will be slimmed down to 23.

Ignore the fact the numbers he cites and Capgeek uses are slightly off. The point is obvious: someone has to lose a job here. So who goes?

Aaron Rome and Lawrence Nycholat were already considered long shots to make this team, and it is likely that the two will spend the majority of the season in the minors. With Cody Hodgson is still question. Can he make the jump into the NHL this season? If he can, it leaves one less spot for the likes of Jannik Hansen, Rick Rypien, and Kyle Wellwood.

To get to 23 players, let's say Hansen ends up in the minors with Lukowich, Nycholat and Rome. That would leave the Canucks with a $57.3 million salary. Still too much. But it's close.

It's comical how quickly this got messy. And it's getting much tougher to nail down MG's motives (one second he's pillaging the NCAA ranks, the next he's moving a rock to find Scatchard and who knows what other vets and yesterday he went on a defender bender).

But you can see where we have some overlapping talent in the likes of Bieksa and Ehrhoff, Salo and Schneider, Mitchell and Lukowich. Nothing has been addressed about Hodgson or the glut of potential third liners like Shirokov or Grabner either.

So, just for fun, ignore the humanity who Vancouver could lose to waivers and/or to Manitoba. I'm curious what you think for the following two questions:

I'll start off with some names, but feel free to add your own.