Share All sharing options for: Gillis Says He Will Sign As Many As 4 Veterans Who Are Trying To Rekindle Their Careers 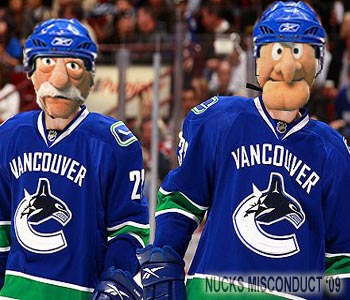 This coming from Matthew Sekeres at the Globe and Mail. Sekeres reports that the Canucks have signed Dave Scatchard and are still in contract talks with Mathieu Schneider. Schneider had shoulder surgery this summer but Gillis believes the 40 year old is ready to go.

"Obviously, everything is always conditional on passing a physical," said Gillis.  "I believe he’ll be ready to go."

Let the speculation begin on other vets who MG could invite to training camp. And please don't say Chris Chelios. MG sure has a thing for the "unwanted" players, doesn't he? It's like Vancouver is a haven nowadays. I don't mind at all. He believes that this will push guys like Cody Hodgson and Michael Grabner even harder to make the squad. This is going to be an amazing training camp, make no mistake.

You may be hearing that both Schneider and Roberto Luongo have been signed, but there is no official confirmation of that yet except from twits on Twitter. As I had pointed out in one of the comments sections, rumors have Schneider signed at 1 year and $1.5 million and Luongo at anywhere from 5-6 years at $6.75 million. None of this has been confirmed by any major media outlet who I trust.

EDIT: TSN's Darren Dreger has just told Team 1040 (bottom of article) that the Schneider deal is a 1 year $1.5 million deal. Nice work, Twitter twits! That's a serious bargain for Schneider, but he has not put pen to paper yet.

Edit: It appears Yankee Canuck has got his hands on an open resume that Mike Gillis is handing out to unsigned players. He posted it in the comments section, and I'll paste it here because it's a must-read.

SUMMARY:
The NHL forward will be the main contact for offensive-minded work and occasional defensive-minded instructions and responsibilities during NHL Vancouver Canucks hockey (HOK-EEE) games.

ESSENTIAL DUTIES AND RESPONSIBILITIES:
(other duties may be assigned as required)

* Scoring
* Primary assists
* Secondary assists
* Some backchecking every once and awhile wouldn’t kill either
* A positive Corsi to keep statzi’s happy
* Suffering through multiple line changes silently with a smile on your face
* A Frenchman pit boss questioning your dedication to the media
* Air travel. Lots of air travel. Seriously, it’s a ton so no bitching
* Soccer with the Swedes in the hallway during the pregame hours
* Talking to Dave Pratt without strangling him
* Reading Tony Gallagher without strangling him
* Willingness to sit next to Andrew Raycroft on the team bus and seem interested in casual discussion

* Cheerful, high degree of personal and professional integrity. No sense in being old if you can’t be pleasant and honest
* Works cooperatively, strives to meet team goals (e.g. you hate Calgary and everything it stands for)
* A passion for success. If not, you had the ability to fake it on camera.
* Works with enthusiasm, dedication, respect and pride. No sassing the Orca.
* Strong customer/fan focus. They’ll no doubt be watching your real estate dealings closely.
* Receptive and adapts well to change. We can’t stress this one enough.
* Willing to share prescription meds with team mates and traveling media personnel

Interested, qualified candidates are invited to submit their resume and cover letter, specifying position applied for, no later than Wednesday, September 9, 2009.

We thank all applicants for their interest; however, only those shortlisted for interviews or ones keen enough to send in bribe money with their applications will be contacted.