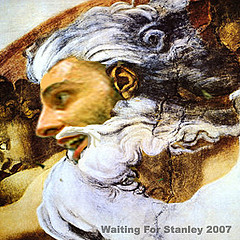 We keep hearing Mike Gillis saying that he is positive that the Canucks and Roberto Luongo can reach a contract extension before training camp. Yet, not much has been said publicly by Luongo, except that he wants to play for a Cup-contending team. Well today Luongo and his agent Gilles Lupien has shed some light on Luongo's side, and it should give Canucks fans some sense of relief (except for you "trade-Luongo peeps).

"I think it's important not to have this distraction there during the season, Luongo revealed prior to the start of the first edition of the golf tournament that bears his name. Especially with the Canadian media, it can not never end! That's why we will try to resolve it before the start of camp, so there is no problem during the season."

"The biggest issue between Roberto and Vancouver was' is he wants to stay here?'' And the answer was given. Roberto wants to end his career there," said his agent, Gilles Lupien. "Now it's a question of length of contract."

Luongo admitted that it took him quite a while to get over the 7-5 Game 6 loss to Chicago, but took solace in the fact that great Patrick Roy had done the same thing in the past and always rebounded.Great point. Roy would put the puck into his own net and still rebound the next game.

I believe Roberto is no different. He is constantly challenging himself.

The original article can be found here.

Major tip to QCanuck at CDC for finding the story.

I wonder what the hold up is as far as "length of contract" is concerned. Is it the fact that Cory Schneider may become a starting goalie soon at a cheaper price? There is no doubt that if Luongo is signed to a considerable lengthy deal that Schneider will be traded. Damn, imagine the possibilities. The Canucks could get immediate help via trade route or solidify top draft picks over the next few years.

Put the pen to paper, Gillis. Get it done!