So that thing I said about your wife...

Share All sharing options for: So that thing I said about your wife... 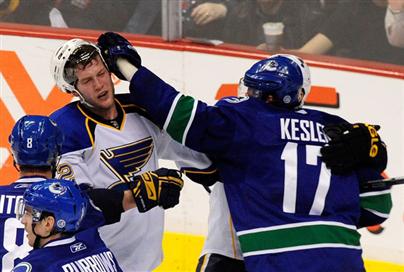 Perhaps you'll remember during the first round of the playoffs there was a brief exchange of pleasantries caught by an open mic between the Canucks and Blues forward David Backes. It seemed that little meeting of the minds helped set the tone for the remainder of the series.

So imagine the forced smiles all around when Backes and Ryan Kesler weren't just at the USA Olympic camp together but, son of a bitch, sounding like they could end up on the same line:

David Backes, Dustin Brown and Ryan Kesler play the kind of game Team USA GM Brian Burke adores -- a borderline, physical nature that all but guarantees their spot on the 23-man 2010 squad. Burke dropped the names of Backes, Kesler and Brown on Wednesday when asked about the kind of players he believes he must have on this squad.

Not terribly shocking a Burke-designed Olympic team will be looking to flatten the opposition during the Winter Games. And of course they are professionals but let's ask just for curiosity's sake: isn't it weird to be buddy buddy with a player who, in about six weeks, you'll want to eviscerate with a spoon? So sayeth the KesLORD:

[Team USA coach] Ron Wilson was giving me crap out there about not agitating here....I told him I had to make some friends on the team before pissing them off during the season again...It's weird playing with these guys out here. They definitely hate me during the season.

That said however, a Brown/Backes/Kesler checking line would be absolutely filthy. Wouldn't want to have your head down skating near any of 'em.

Battle of California has their take too.