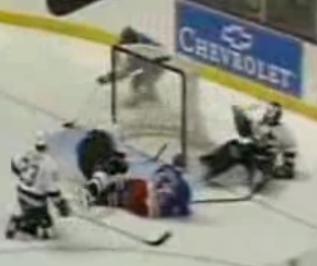 I'll keep this one brief because I'm sure this still stings Canucks fans, or it's about to. On October 11, 1997, Wayne Gretzky and the Rangers came to Vancouver to play a game that the hockey world was watching. Wayne was about to play against his buddy Mark Messier, who then played for a lousy Canucks team. Mind you, the Rangers were not so great themselves.

Gretzky said it was going to be an emotional game. I can still remember it. I was thinking that The Great One was slowing down in the latter stages of his career and I wondered if he'd do much damage at all. Well, in dramatic fashion he scored 3 goals that night as the Rangers won 6-3, making Kirk McLean and the Canucks look stupid in the process.

His hat trick goal was a thing of beauty. He waltzed into a busy Canucks zone, faked a shot that Martin Gelinas suckered for, then faked another shot to McLean's left, which Kirk supremely bit on, putting him way out of position, and Gretzky circled around the net and scored an easy goal on the backhand into the yawning cage (as pictured above). It was one of those goals that had me thinking: "Damn, Wayne is great, but hell the Canucks sure are BAD!"

That was Gretzky's 50th career hat trick and also the final one of his career, as he retired in 1999. Another Gretzky milestone at the expense of the Vancouver Canucks. Yay! You can see these 3 goals at the 5:00 mark of the clip below.

I wonder if anyone will ever catch this NHL record by the Great One.