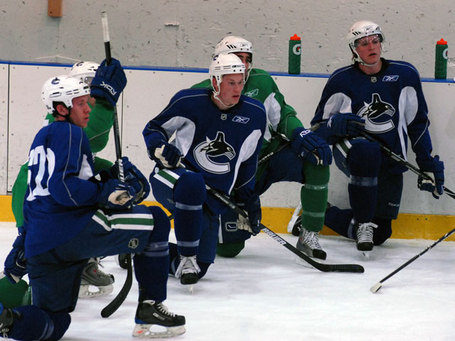 Day one of the Canucks Prospect Camp was today and the Canucks Report has a decent recap:

The players were split into two groups that skated concurrently; group 1 tackled puck-handling fundamentals with Dusan Kralik, senior instructor with Endure Sports who has trained the likes of Sam Gagner and John Tavares, while the second group worked with Ryan Lounsbury, assistant coach of the men’s Brock Badgers hockey team, on skating.

The players were run through a variety of skating drills that showcased their technique, stride, turns, pivots, etc., which was all filmed and will be analyzed by Lounsbury.

"It’s only the first day so there are some nerves around but everyone’s getting their feet wet and feels pretty good," said 22-year-old defenceman Ryan Donald, a first-time camp invitee.

Check out their media gallery too.

Better still, a CDC user named 'Carlweezer' had a first hand view of the prospects and spoke about who stood out for the right or wrong reasons. Granted it's just his or her opinion, but I'll quote most of the account below because we may as well focus on the kids considering the less than stellar signings Vancouver had today:

The Good: Anton Rodin! Wow! this guy is as smooth and fluid as any propsects I've seen in the last 10 years. The best part about his game seems to be stick handling. He was going thru puck handling drills with ease and no effort while other prospects were having very difficult time accomplishing the drills to the coaches liking. I was very very impressed with Rodin and can't believe we got this guy in the 2nd round and he is only 18! looks like a steal!

The Surprise: Pat White - he was very very strong during day one, it seems that White has a mature body while other are still developing. He was very vocal and was the last person to leave the ice when practice was finished. The most surprising attribute about White is his wrist shot/snap shot. It is verry very hard and accurate. I couldnt believe some of the shots he took that even baffled the goalies.

The So and So- Jordan Schroeder - he is very short but built like a TANK. He took a picture with my friend who is 5'9 and they are almost same height except of course Jordan was on skates. His legs and shoulders were very massive however. Now to the on ice- it seemed Jordan was a little nervous during his first day at a pro camp. He kept losing the puck during puck handling drills and he seemed very frustrated. However, Jordan completely dominated the passing drills and was easily the best at making tape to tape passes as well as one touch passes in the camp. His skating needs to develop as his strides look to short right now. I look for Jordan to have a better day at GM place tomorrow.

The Bad - I hate saying anyone is bad because they are all Canucks but one player stood out the most as someone that is not ready. Prab Rai. His skating is awful. He kept falling when the team did backwards power skating. He also needs to develop physically as it seems like he only weights 160lbs.

The Exciting- Peter Anderson - I\am very excited to see this guy progress. He is massive at 6'3 and looks very very confident with the puck. He very much reminds me of an Edler. His hands are smooth and soft and was making unbelievable passes out of the zone. He isnt however very physical.

Here's hoping Sauve and Ellington continue their improvement because, at this rate, the Canucks may need them.