I Keep Away From Run-Around Mats

Share All sharing options for: I Keep Away From Run-Around Mats 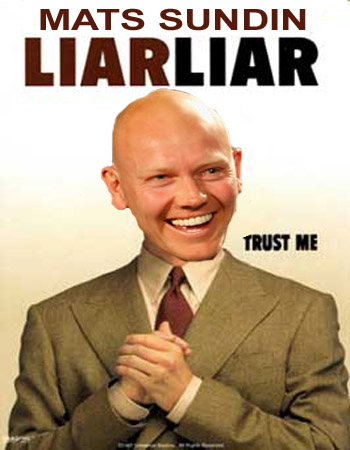 Nearly a month ago (July 3), Mats Sundin told a Swedish newspaper that he would make up his mind on whether or not he would play again by the end of July. Well, tick tock Mats, the hour draws nigh. Mike Gillis had also said at that time that he was inquiring about Sundin's intentions 3 or 4 times over the past few weeks.

Here we go again. No decision from Sundin. Being a massive fan of his, I read the Swedish papers daily looking for something. Yet all is quiet. But what am I really waiting for? I don't think it's to see if Mats will play so the Canucks can sign him. He would have to take too much of a pay cut to fit on Vancouver's roster. Even if Demitra was flogged it still wouldn't be enough. Only Luongo's salary would have to be erased in order to fit Sundin on the Canucks' roster. Not going to happen.

Given the fact that Alex Tanguay cannot find an NHL job at this point, as he sits in limbo in free agency, there are not many other teams out there that can or are going to fork out that $7 million (for example) on a Sundin contract. Not right now.  So in reality, Sundin doesn't even have to immediately make up his mind, as teams are finalizing rosters preparing for the next step.

What am I waiting for? To see if he'll play again. Regardless of where he decides to play I'll still be a fan of his (except the Rangers I suppose). But it seems increasingly evident that he will marry Josephine Johansson next month, reportedly, and that we won't get a decision from him any time soon. Would Mats join a team midway through the season again? It is possible. He has also stated that he will not represent Sweden in the 2010 Winter Olympics in Vancouver, which adds fuel to the speculation that he may just retire.

So when Gillis tells us that "the door is wide open for Sundin to return to the Canucks" read between the lines. Sundin's salary will not fit into the Canucks' situation and......Gillis would have to let Sundin come back at Xmas again to pay half his demanded salary. The latter scenario is not entirely out of the question, although it would be scoffed at by many.

Call me insane, but I'd welcome Mats back at Christmas if need be. But I'm biased. Nearly 100%. The other part of me is screaming "make up your fucking mind already!" Scott Niedermayer and Teemu Selanne only got away with it once and they are barely forgiven for it. Sundin pulls this card twice and nobody is really going to respect him for it, except for a vast minority. I'm not so sure I'm part of that minority anymore.

I'm also nearly suffering from heat stroke. Christ, have you guys seen the weather in BC lately?

A storm rolled through my hometown of Smithers last night and still the weather has not cooled down. 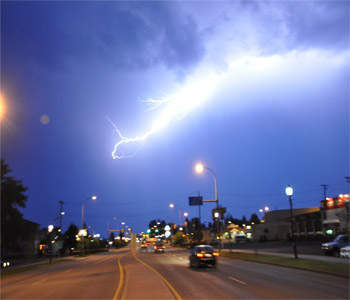 Yup, I took that shot. They don't call me trigger finger for nothing. Ha!