Wellwood's Agent: He Will Sign With The Canucks; UPDATE: Signing Confirmed at $1.2 Million.

Share All sharing options for: Wellwood's Agent: He Will Sign With The Canucks; UPDATE: Signing Confirmed at $1.2 Million.

Mike Liut has told the Team 1040 today that his client will agree to terms with the Canucks. Liut did not disclose the dollar amounts but said that the final number was one both sides could agree on.

"When they offered the qualifier and Kyle opted for salary arbitration, at that point you're accepting a contract and you just have to fill in a term," Liut said. "So we'll get the term and the next stop is training camp. There's no chance of (free-agency) happening, because the parties weren't in that range."

Thus the deal will not be more than $1,570,000, because the Canucks would have had the chance to walk away. This does enforce the fact that the Canucks have too many forwards and that Gillis is most likely going to go the trade route sometime this summer.

Wellwood has not said a thing about negotiations until today, where he told the media from his Windsor home:

"That's definitely a big positive. It's always nice to get a raise and hopefully I can prove my worth this year to the Canucks and show that I was worth it."

And your updated Vancouver roster, now suspiciously looking a lot like last season's: 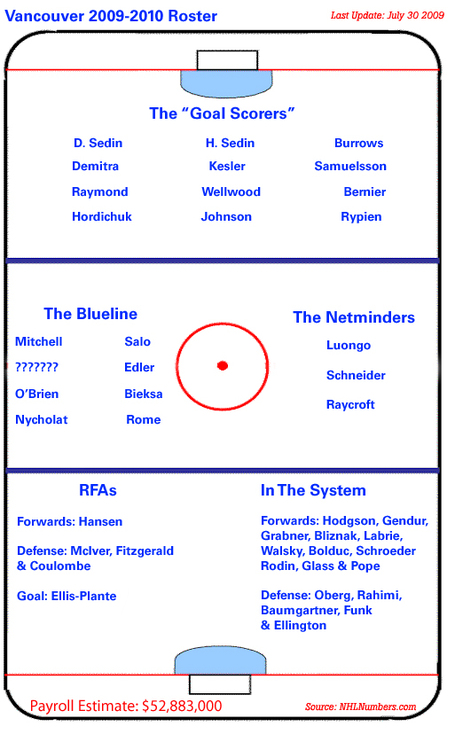