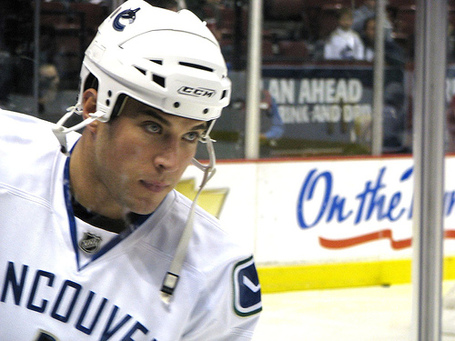 According to the Province, Taylor Pyatt has told a newspaper in Thunder Bay (his hometown) that he has given up hope for re-signing with the Canucks and is exploring other options. (Many female Canucks fans and this guy collectively mourn).  Mike Gillis seemingly does not intend to bring him back, with so many other options up front. Pyatt enjoyed his time in Vancouver.

"I really enjoyed my time there. The organization treated me great and my teammates were great to me, but I guess it’s time for me to move on," he said.

With declined production and a lack of speed, it may be hard for Taylor to find a job in the NHL unless he takes a pay cut (he made just over $1.5 million last season).

Pyatt's time in Vancouver had its ups and downs. The former 1st round pick of the Islanders was supposed to be the next Sedin but didn't pan out there on a consistent basis. As time went on his role slowly diminished into a checking winger.

We'll see what happens. Either way, thanks for your time here, Pyatt Riot. Hope you're continually progressing after your loss and that you find an NHL gig somewhere.

Feel free to post your favorite memories of Pyatt in the comments section.

The Province also talks about Restricted Free Agent Jannik Hansen telling a Danish paper that he wants a 1-way contract with the Canucks and that is the sticking point in negotiations with Vancouver at this time. I can see Hansen's point. He is NHL-ready (right?). But the Canucks are going to have too many forwards soon with the emergence of Hodgson and Grabner and perhaps Kyle Wellwood, who'll have his arbitration case settled on Tuesday I believe. No room for Hansen. He is trade bait.