Share All sharing options for: Where Vancouver Stands Now

1. The Sedins: Right down to the damn wire but the twins heard a number they liked and signed right before free agency kicked off. In the end, this was the best move for both sides. Vancouver would have been f'ed had the twins left plain and simple; judging by the numbers we've seen today there was no chance free agency would have filled that void. And, as we know, Vancouver doesn't have too many desirables to dangle in a trade scenario either.

For the twins, they still have a better chance at the Cup with Vancouver than if they followed the money to Montreal, Toronto or Los Angeles.

This is very much their team (as it is Luongo's) and Gillis has to make it a priority to do something Nonis never did: get them proven, quality support. The Sundin move last season was a one-off. No more Taylor Pyatt or Steve Bernier pet projects. If Burrows remains on their line, that's fine but the second line needs a Sundin replacement and slotting in Hodgson or scouting the bargain barrels isn't an answer, certainly not to keep pace in the West.

2. Luongo's extension: I wouldn't put too much worry into TSN reports of a snag into the negotiations. Luongo will get extended, though maybe it'll wait a few days as Gillis and team pay attention to the free agents frenzy. Latest numbers are five years and $40 million.

3. Aaron Rome: Hey a guy with a Cup ring! That aside, he's pure depth and nothing else. Don't expect much (unless you expected a lot of Davison last year and, in that case, bottoms up). More information on what we got is here.

A quick word on Ohlund: we knew all along he wasn't returning. But he got an incredible deal at his age and joins a solid defensive unit and gets to be a mentor for Hedman to boot. All around it worked for both sides and we wish nothing but the best for our franchise defensive point leader.

4. The rest of the Northwest: Quite a stacked set of goalies in our neck of the woods, eh? Khabby, Backstrum, Lui, Kipper and now Anderson?

I've heard a lot of complaining that everyone is getting better but us today...well they said that last year and look what happened. Things will work themselves out. And for the record Boumeester doesn't make the Flames Cup favorites anymore than adding the Joker at the trade deadline does (and remember, the media kept falling over themselves praising that move too).

This isn't to suggest there isn't cause for concern about how Gillis fills the remaining gaps. Personally I fear he's going to go the bargain bin route because he has no other option. Or maybe he's banking on at least Grabner and Hodgson making the roster and he'll focus his remaining efforts on the blueline (as the reports he was kicking the tires on Niedermayer up until he resigned in Anaheim).

If you look at the new reality, you can see where he has to get another top six forward and then work on the defense (started today with the Rome pick-up). Some protection for Lui's groin is also required. 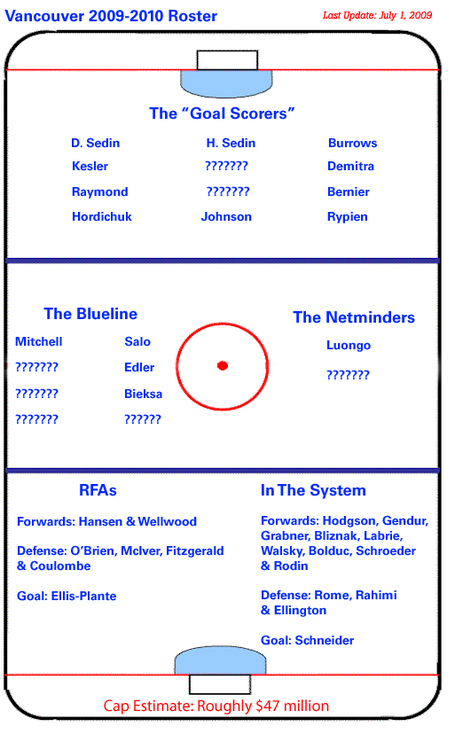 If you check the big board, lots of names are still out there. On defense there's still guys like Derek Morris, Paul Mara, Marc-Andre Bergeron, Francois Beauchemin and Jordan Leopold (come on back to the NW sir!). Up front there's still some potential deals to be made with Kyle Calder, Travis Moen, Ruslan Fedotenko, Mikael Samuelsson, Manny Malhotra and Jason Williams. Or larger gambles on Nik Antropov, Saku Koivu, Marian Gaborik, Martin Havlat, Brian Gionta and Alex Tanguay.

Though, you should know the names in that "larger gamble" group don't have a snowballs chance in hell of becoming a Canuck. Dare to dream though, it is July 1st.

So how do you think today went?