Share All sharing options for: July 1 Liveblog: "At My Signal, Unleash Hell"

10:28 PM ET - And thus ends the Havlat flirtation for Vancouver. Via TSN, he's likely heading to the Wild (who have traded one oft-injured winger for another).

9:10 PM ET - Madden lands in Chicago (do they have a cap or are they an exception to the rule?). Chril Neil sticks around in Ottawa on a four year deal.

8:38 PM ET - Labarbera is off to the desert on a two year deal with Phoenix. Gionta inks a five year deal with the Habs (Gainey has certainly picked it up this evening)

7:50 PM ET - Some more trickling in. Via TSN, Mathieu Garon joins Columbus on a two year deal and Jason Strudwick re-signs with the Oil. If you check out Lowetide, you'll see how close Edmonton is to the cap, so they can't be done yet.

6:12 PM ET - A few more over the past hour, including some you can scratch off the wishful thinking list: via TSN, Sharks sign Kent Huskins to a two year deal, the Avs add David Koci to a one year deal, Mike Cammalleri to Montreal for five years and $30 million bucks, Minnesota signs Greg Zanon to a three year deal, Vern Fiddler signs in Phoenix for a year and Mike Komisarek to the Leafs in a five year deal.

4:05 PM ET - Bob McKenzie just said that Erik Cole is close to a two-year deal with the Hurricanes and that Nikolai Khabibulin has an agreement with the Edmonton Oilers.

3:55 PM ET - Gillis and Luongo are still negotiating so don't expect the extension to be announced today (via TSN).

3:39 PM ET - Joel Ward resigns in Nashville and old friend Krajicek resigns in Tampa Bay (who's defense I am basically just jealous of at this point...and it has nothing to do with Ohlund).

3:12 PM ET - Here come the experiment players for the Canucks: they've signed defensemen Aaron Rome to a one year deal. His stats are below, don't everyone freak out all at once:

2:52 PM ET - Andy Strickland is reporting the Capitals have signed Mike Knuble to a 2 yr. deal worth $2.8 per. Nuts I always liked Knuble but he's an American guy who I don't think has ever played outside of the Eastern or Central time zones. Good upgrade for Feds going to Russia too.

2:47 PM ET - NYRNation is saying Donald Brashear is a Ranger. Why must the Rags continue to ruin my opinion of ex-Canucks? Why oh why??

2:36 PM ET - Via Mirtle, the Hawks also signed Tomas Kopecky away from Detroit.

2:10 PM ET - Hossa to the Wings is done. That's a beast of a contract. Helping that is the Hawks lose Matt Walker who signs with Ohlund down in Tampa. The Lightning are developing a nice defensive core (I'm jealous).

1:55 PM ET - Via the Denver Post, Avs ink Craig Anderson to a two year deal. So it's Anderson and Budaj for the Mile Highers.

1:47 PM ET - Botchford from the Province thinks Niedermayer and Gaborik get calls from Gillis today.

Also, Hossa to Chicago sounds like a done deal per TSN Live.

1:44 PM ET - Sounds like Kovalev signed a two year deal with Montreal (looking for source) and Booth re-ups in Florida for six years.

12:56 PM ET - The release from Vancouver concerning the Sedins signing:

"Daniel and Henrik Sedin are this club’s offensive leaders and players we want to build around," said Mike Gillis. "Their level of performance in every area of the game is exceptional; both Daniel and Henrik are committed to winning and we want them to succeed as Vancouver Canucks."

12:46 PM ET - Via TSN, Radek Dvorak re-ups with the Panthers and the Hawks closing in on Hossa still.

12:32 PM ET - Dreger is reporting that Niedermayer is entertaining offers.

12:29 PM ET - Chatter is Hossa is aiming for the Hawks. Yeesh, this guy isn't going to be liked anywhere he goes.

12:08 PM ET - @Russostrib is suggesting that Havlat and Fedotenko are going to test the market.

11:30 AM ET - Shorter term for a bit more money. Lots to like about the Sedin signing, point a game producers locked up through their prime. If they get Luongo signed to an extension, it'll be a lot easier to sell this team to mid-ranged UFA's for the rest of the summer (dreams of Eric Cole continued unabated). Well done Gillis.

And, finally, the updated roster looks a bit easier on the eyes: 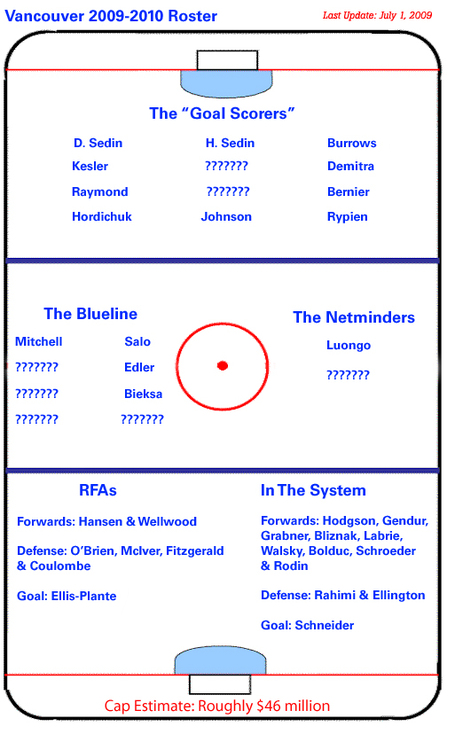 11:16 AM ET - Get your drink on early folks: The Sedins have resigned, five-year contacts, averaging $6.1 million a season. Golf clap! (Now Gillis go get them some help!)

11:08 AM ET - Happy birthday Pamela Anderson, you 42 year old maniac. In hockey news, nothing new on the Sedins front and under one hour to go. Yawn.

10:41 AM ET - I've posted the Canucks roster chart below (updated roster is above) in case you need to keep score. There are a hell of a lot of holes, even more if the Sedins leave.

9:33 PM ET - Via Kukla, at least the Oilers are still struggling.

9:10 AM ET - For fun, via the NY Post, let's all delight in the collective joy that can only come from a big, fat NY Rangers FAIL.

8:58 AM ET - Opps, one more bit of Canuck news via the White Towel: Davison is joining Pyatt on the UFA line.

8:55 AM ET - Just to catch you up on the latest, Johnny Oduya resigns with New Jersey, Rob Blake returns to San Jose, Bill Guerin is sticking around Pittsburgh, Mighty Mike Weaver and Brad Winchester re-up with St. Louis, Peter Budaj (snicker) returns to Colorado and Erik Christensen resigned with Anaheim this morning.

...and the big day finally arrives. First off, a happy Canada day to all my friends up north. Enjoy plenty of booze and sun for those of us who can't spend their average Wednesday doing such.

In a few hours, the hell will be unleashed as the UFA will kick into action. If last night's whirlwind of Sedin rumors, failed Heatley-to-Edmonton signings and Boumeester moving into the neighborhood is any indication, it should be a good one.

A final farewell to one Mattias Ohlund. the Canucks' all-time leading goal-scorer among defencemen and all around stalwart warrior for eleven years. Enjoy your next stop (please don't stick around the Northwest) and we'll enjoy watching you from afar.

And the Sedins? About three hours to go and nothing confirmed. Nervous yet?

I'll post what I can find, but if you see anything, do your thing in the comments.