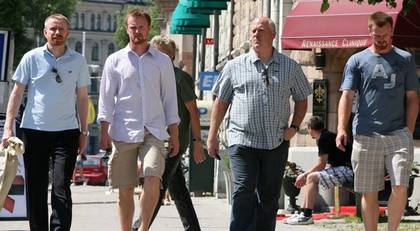 The Sedins spent Tuesday morning in Stockholm eating breakfast with their 2 agents, Claes Elefalk and JP Barry and Mike Gillis and Lawrence Gilman. According to Hockeyexpressen Gillis and Gilman still offered 5 years but at $6 million per season. Then they discussed the importance of the Sedins not only in Vancouver's plans to win a Stanley Cup, but also in the community. he meeting only lasted an hour and a half. Then Gillis and Gilman flew home. The Sedins and their agents mulled over Gillis' proposal all day.

I'm not really giving you any news here (well except for the $6 million, which I hope didn't get lost in translation).

Henrik told Sport Bladet that the Sedins said what they wanted to say, but there were disagreements. The biggest disagreement of course being the length of the contract. Gillis just will not commit to more than 5 years.

I don't want to wake up to a "no" answer from the Sedins a few hours from now. I would also hope that they have a definitive answer by 9:00 AM PST and don't drag this out beyond that while the other UFA's get snagged.

9 more hours and the face/fate of the Canucks could be so different. Hell, the Twins could be Leafs or Rangers by the end of the day. The consensus from most pundits is that the Leafs are front runners for the Sedins if Vancouver is rejected. I would agree.

Bottom line is that if they walk, Gillis had better re-stock the cupboard...and quick.

Are you ready for this? Let's just get it over with already.