Should Vancouver Trade Their #1 Pick?

Share All sharing options for: Should Vancouver Trade Their #1 Pick?

I think most fans treat their team like an adopted child in a way. You care about it, want to see it do well, scold it when it's bad and hope to see it grow up and become a millionaire so you can go retire on a private island with a margarita in one hand and yourself in the other (Thank you Al Bundy).

So while I recognize the Cup can make its appearance tonight and Detroit can dance their happy dance yet again, I don't really care. I care about what the hell Mike Gillis is going to do in Montreal in about two weeks and when free agency starts in almost exactly three.

In past offseasons, I put together a little chart that shows where the holes are on the team. This morning I updated the chart for the first time since last July: 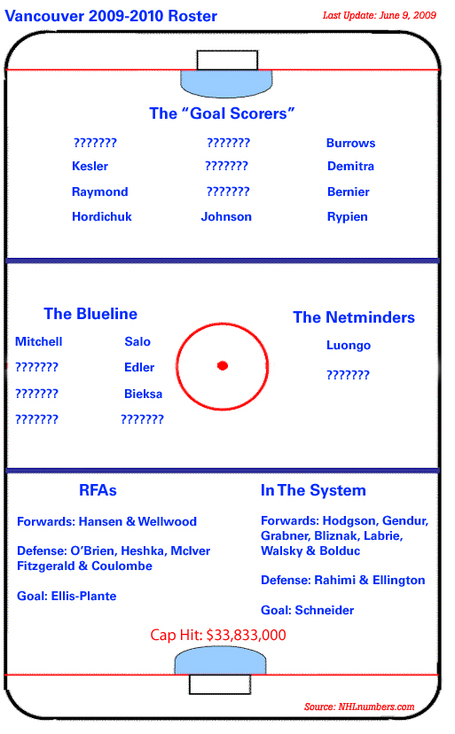 Did you shit yourself a little? Good. So did I.

I don't mean a full blown, Islanders-level panic deuce. I mean you can see where the weaknesses are pretty easily. A few things:

1. The center position has gone from its usual questionable role to completely scarce. You can slide Kesler back to center and even Demitra for that matter. And yeah I know Hodgson is waiting in the ranks but let's be serious before we chuck the kid in there as a first or second line center.

2. The defense is messy. Even if the Bouwmeester concept turns into a reality, you're still missing three guys and your best chances at stuffing the bottom four (O'Brien, McIver and even Fitzgerald) are all RFA's.

3. Isn't it great that Jaffray is kicking ass down in Manitoba? Isn't it sad he's a free agent too?

4. I still think the Sedins will sign here, but what if they don't? How do you rebuild the first and second lines that can hang with the rest of the Northwest, to speak nothing of the entire Western conference?

This lead to me thinking about moving the 22nd pick. Granted you have to find a dance partner (or two: see Cammalleri's trade at the draft last year) but what if Gillis can land a proven roster player now at the expense of a potential one down the line? You see the holes we're looking at. Sure maybe you fill one of two in the first week of free agency, a couple more before training camp and then let the kids fill in the gaps from there. But if Gillis could land a Cammalleri-caliber player, wouldn't that beat picking another Nathan Smith or Patrick White?

Still, it's a tough bet to trade the first rounder, especially when the Vancouver farm system is as promising as the fat chick at the end of the bar winking at you as they announce last call. You have Hodgson, Grabner, Schneider sure, but it's slim pickenings from there on out (check out Hockey's Future's #1 negative about the Canucks prospects).

It's tougher still when you consider that if Vancouver moves their first rounder, and assuming then don't get a higher second rounder in return, they won't actually stroll up to the mic until the 53rd pick. After that would be 83rd and then 113th. So Vancouver moving their #1 pick is akin to pretty much throwing out this year's draft and/or hoping for a Pavel Bure-esque dark horse coming out in the later rounds (an aside - Bure was picked 113th overall back in 1989, so 20 years later and with the same pick, do you believe in miracles?).

Gillis has some large holes to fill, a franchise on pins and needles in respect to three players (the Sedins and Luongo's contract) and about $23 million in cap coin to spend, resign and keep as insurance for the inevitable rainy day. He can't simply resign the Sedins, add another veteran like Demitra and expect his team to be any better. To fill some of larger gaps in the roster - and to keep people coming into a now larger GM Place at higher prices - he'll need to make a definitive impact somewhere this summer, be it with his first round pick or with his wallet.

The one thing I do love about Gillis is that he's willing to be unorthodox or atleast he was in his first honeymoon year. But will it continue? Unless he's eyeing a top ten pick in the 2010 draft, I don't see how it can't.