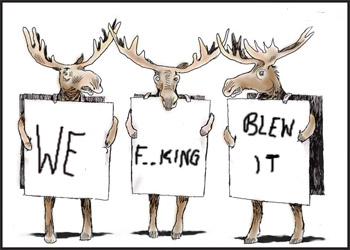 The Moose look timid to start the game, and the Bears are taking advantage of it. Good thing Cory Schneider is making save after save. Over 6:00 in and the Moose are being outshot 6-0. Then Shaun Heshka takes a penalty. 8 seconds into the Bears' PP Graham Mink scores with a screened shot. 1-0 Hershey.

At least that woke up the Moose. Now they are picking it up, but Michael Neuvirth is robbing them.

BAM BAM BAM. Huge hits out there, especially from the Moose. Wow. The Bears' play by play guy is calling out the refs badly. Hilarious. Doesn't like seeing his team get beat up. The Moose got a power play as a result of their aggressive play but hardly generated a decent scoring chance.

Not the start the Moose wanted. They were talking before the game how they wanted to score first and keep it close. Now they have to score the next goal.

The Bears were dictating the play to start the 2nd period, but then took 2 consecutive penalties, putting the Moose up 2 men. The Bears masterfully killed that off, blocking most of the shots and covering up well in front of Neuvirth.

Moments later, with 10:22 left in the 2nd, Moose player Zach Fitzgerald and bango, Claude Giroux wires a one-timer under the cross bar to make it 2-0 Bears. 2 PP chances, 2 PP goals for Hershey. This is the first time the Bears have had a 2-goal lead in the series. Poor Schneider, he's playing so well, and had absolutely stoned Giroux earlier in the period while laying on his face.

The Moose started pressuring in the latter stages of the 2nd, but the chances were mostly half-assed and Neuvirth stoped all the rest. This is not a good game by the Moose.

The Bears are shutting the Moose down completely. They have better foot speed and have looked like the hungrier team for about 90% of the time tonight. Sure, Michael Neuvirth gets a lot of credit for stoning the Moose on occasion, but it is more of a team effort from the Bears.

Empty net goal by Quintin Laing and the Bears take this one 3-0. What a general lack of effort and chemistry from Manitoba.

Next game is tomorrow night.